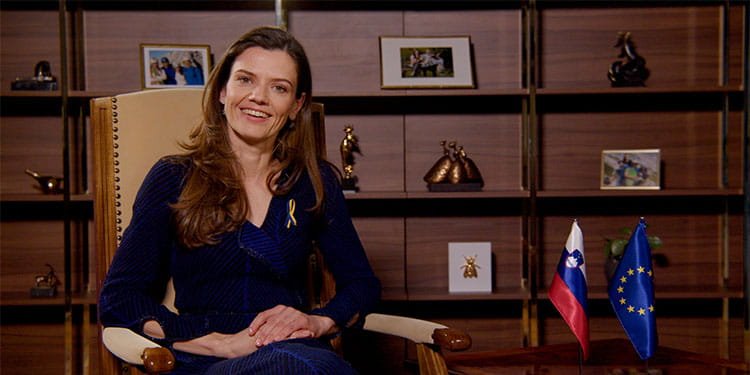 Mrs. Urška Bačovnik Janša, the wife of the Slovenian Prime Minister, expressed her support for Iranian women in a message of solidarity to the Berlin Conference, “Women, Force for Change in Iran, Global Peace and Security,” on March 5, 2022.

Following is the text of her message:

It’s a great honor and pleasure to attend this conference with so many distinguished guests under the great leadership of Maryam Rajavi.

As a Muslim woman, Maryam has had to overcome extraordinary political, social, cultural, and ideological challenges put in place by the ruling regime in Iran.

I commend Maryam’s courage and commitment to empowering Iranian women.

Under Maryam’s leadership, women have risen to hold key positions in the Iranian Resistance movement.

I admire the work of the NCRI Women’s Committee that I have been following closely for quite some time.

Iranian women have been on the frontline of protests against Iran’s Islamic regime. They have shown enormous courage, intelligence, and strength.

We, women around the world, can be proud of all of them.

But despite all their heroic efforts, the Islamic Republic of Iran continues restricting the rights of Iranian women and erasing them from all levels of society.

Iranian women continue being the first victims of the regime. They continue facing unimaginable discriminatory laws for the 21st century. Women not being able to travel abroad or obtain a passport without the written permission of their male guardians. Women are prohibited from singing or dancing or women face up to fifteen years in prison and receive lashes for the so-called bad hijab.

I continue being deeply affected by numerous reports of sexual abuse that Iranian women have witnessed in prisons. Numerous women continue being executed.

There are serious concerns over a rigid judicial system.

Women are executed for murder, but the reality is they are just victims of horrendous domestic abuse. They will kill to defend themselves or their children since they have no legal means to end an abusive marriage.

Unfortunately, I could continue with other examples of the outrageous situation of women in Iran, but my time is limited.

So, I would like to take the opportunity of today’s event to pass a very strong message to my fellow Western women and Western governments.

We must stand firm together, against the policies of the Iranian regime that strangles women’s freedoms. Words of western women’s organizations and governments must be put into action.

We must be there for Iranian women.

IWD 2022 - International solidarity with the women of Ukraine, Iran