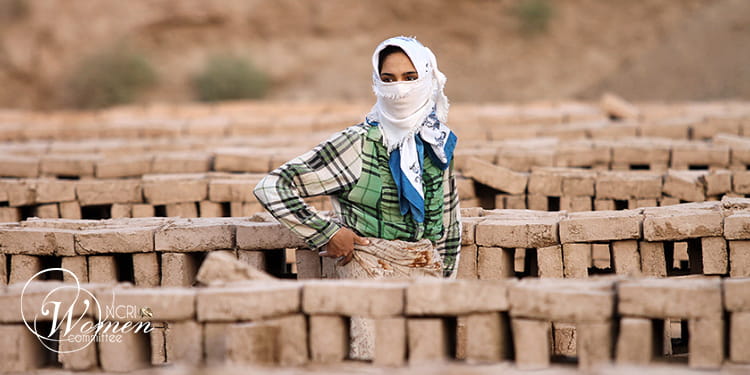 Every year on May 1, we celebrate International Workers’ Day. However, this is a day of grave concern for labor activists and female workers in Iran.

In Iran, the labor market is generally male. In 2019, the official total number of employed women was 3 million, of whom 1 million were out of work by the end of 2020 due to Coronavirus-related conditions. The state-run Jameh24.com website estimates women’s unemployment to be 14 times higher than men’s (The state-run Jameh24.com – April 13, 2021).

However, the clerical regime continually makes deceptive calculations. According to Omid Ali Parsa, head of the regime’s statistics center, anyone who works for even 1 hour per week is counted among the labor force (The state-run Tasnim News Agency – October 17, 2016).

Despite their many talents, efforts to remain independent, and ability to help their families, Iranian women are considered cheap labor. They receive lower wages and fewer benefits than their male counterparts. Moreover, women are the first to be fired or laid off.

At the beginning of 2022, the media reported disturbing news about the widespread expulsion of women from the workplace and the labor market. Since then, the layoffs reported have extended to businesses, factories, and municipalities.

Mohammad Reza Mahboubfar, a social trauma expert, believes that the country’s inflationary recession and lack of government support for women have provided employers the optimal excuse to exclude women from the workforce.

Meanwhile, the number of female-headed households – already high – is increasing. Women’s unemployment has become a crisis (The state-run Jameh24.com – April 13, 2021).

On International Workers’ Day, it is essential to focus on the conditions of female workers in Iran rather than those who are unemployed. Despite the inconsistencies and secrecy of the regime when it comes to providing information, it has been reported that at least 3 million women work in underground workshops (The state-run ROKNA News Agency – August 1, 2021).

The service industry employs more women than men. Since this type of work requires heavy manual labor, female workers experience pain in their hands, feet, and shoulders. In addition to physical pain, these women experience constant anxiety: should they get injured, they will lose their only source of income.

In Iran’s Kurdish areas, women must carry heavy freights or work in construction to support themselves and their families. It has become common for women to carry heavy freights in the border provinces of Kurdistan, West Azerbaijan, and Kermanshah (The state-run ILNA News Agency – April 12, 2021).

Another grueling task that women take on to earn a living is working in kilns. The kilns lack safety standards; moreover, the female employees have no contracts, only loosely defined agreements. Workers’ salaries are between 100,000 ($3.9) and 150,000 ($5.8) Tomans per day, and they are not paid on holidays.

Shifts are from 7:00 am until sunset. Despite the long working hours, the women still cannot support themselves and their families. They must pay transportation costs, which are extremely high given the commuting distances from the city to factories.

“There are no jobs in our area,” said a female worker in a brick factory. “I had to work here. I now have a lumbar disc. We stay in the workshop dormitories for six months of the year. We are deprived of safe drinking water and bathing and sanitary facilities. This has made our children sick,” she added (The state-run Shahrara daily, December 12, 2021).

The National Statistical Center’s website and those of other mainstream state media outlets have failed to publish any specific statistics on women workers in the past few years.  However, according to the latest statistics, of the women who are considered official workers, 1,246 work in quarries, sand extraction work sites, and iron ore extraction (The state-run ISNA News Agency – February 9, 2022).

The situation of female workers in Iran cannot be compared to that of other groups. Women in Iran work under harsh, substandard conditions in exchange for meager salaries with no benefits or insurance. About 80% of uninsured employees are women (The report of the Social Security Organization, 2017).

Labor laws do not apply to female workers in Iran. Laws against women working in difficult and dangerous jobs, staffing night shifts, and carrying heavy loads are routinely ignored.

In a heartbreaking accident in November 2021, a female textile worker, Marzieh Taherian, lost her life when a spinning machine sucked in her head. The day before the tragic incident, Marzieh complained about the hardships of working at night.

“We have to take a night shift once a week, but we do not dare say anything,” said one female worker. “There are no jobs in our area,” said a female worker in a brick factory. “I had to work here. I now have a lumbar disc. We stay in the workshop dormitories for 6 months of the year. We are deprived of safe drinking water and bathing and sanitary facilities. This has made our children sick,” she added (The state-run Shahrara daily, December 12, 2021).

It must be considered that more than half of the 5 million women heads of households in Iran are illiterate. The number of female-headed households is increasing by about 120,000 per year (The mullahs’ parliamentary speaker, Mohammad Baqer Qalibaf, January 25, 2022; Welfare Organization official, Massoudi Farid, the state-run Mehr News Agency, October 19, 2021).

Crushed hopes for female workers in Iran under the mullahs’ rule

In 2021, workers formed several protest movements, calling for an increase in wages. However, the year was not over before a massive wave of inflation crushed all hopes of improving workers’ conditions.

According to official statistics, inflation increased by 15% within the first month of the New Year. Workers and their families can barely make ends meet, let alone female workers in Iran who do not receive even the regime-approved minimum.

According to independent data from the Wage Committee of the Supreme Center of the Regime’s Councils, the cost of providing livelihoods for working families has exceeded the ten million-Toman mark. To put it in better context, if working families want to have a single hot meal per day, their monthly living expenses will exceed 10 million Tomans (The state-run ILNA news agency – April 26, 2022).

Remarkably, the wage limit defined by the clerical regime for workers in 2022 is 2.555 million Tomans (The state-run IMNA news agency – March 2, 2022). By this definition, male workers who receive the minimum wage must make a living on a quarter of the poverty line.

State media outlets currently report that the poverty line is at 12 million Tomans, an amount that female workers in Iran are never paid.

Given the political impasse and the clerical regime’s economic collapse, conditions for female workers will continue to deteriorate. Moreover, with the selection of Ebrahim Raisi as president – an economic illiterate who is commonly known as the mullahs’ executioner – the situation of female workers in Iran will deteriorate every day, and their futures and any prospects for their families will remain bleak.