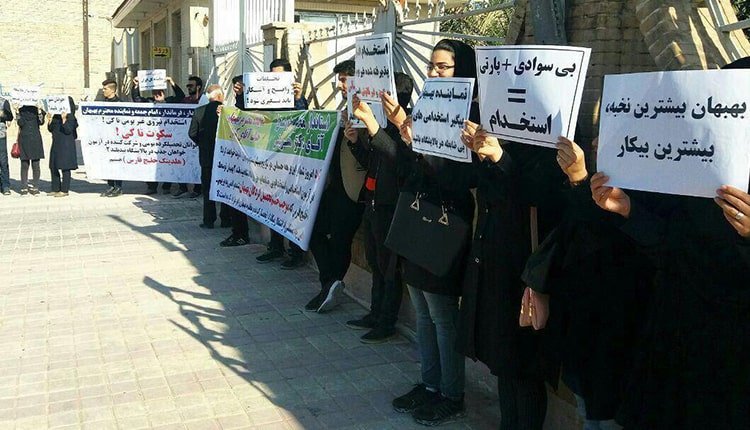 Various sectors of Iranian society, including teachers, defrauded investors, and hospital staff held protests in the final days of May. Iranian women played an active role in all these protests.

The teachers and staff of the Education Departments of Isfahan and Ardabil held protests on May 30, 2019, outside the Departments of Education in these cities in protest to the violation of their rights.

On May 28, 2019, the defrauded investors of the Caspian financial institute in Tehran held a protest outside the Central Bank of Iran.

On May 27, 2019, the defrauded investors of Badr Toos (Caspian) in Mashhad, held a protest outside the Governorate’s building. The plundered customers finally received their savings charge cards four months ago, after five years of being in limbo. Despite passage of four months, however, their cards have not been charged, yet. There are 1,000 plundered investors in the Razavi Khorasan Province, whose accounts have not been charged.

A group of the staff and personnel of the Hospital of Karaj held yet another protest on May 27, 2019, demanding authorities to pay their unpaid dues.

On Saturday, May 25, 2019, the families of the students of Narjes elementary school for girls located in Azimieh in Karaj, held a protest against the school’s plan to start working in two shifts.

A group of environmental activists in Shahroud, in the Province of Semnan, held a protest against the continued operation of a mine which has damaged the Shahvar Peak in this city. On Saturday, May 25, 2019, they held a protest gathering and signed a petition demanding that the mine’s activities be halted. Inhabitants of Ghayzanieh village of Ahvaz also held a protest on Saturday, May 25, 2019, against the lack of the most basic facilities in this village. They blocked the main road and set tires on fire. These villagers live near hundreds of oil well and yet they are deprived of their most basic needs and even clean drinking water.

The workers of Bidboland Gas Refinery in Khuzestan Province, presently under construction, held a protest on May 21, 2019, against widespread layoffs and lack of job security in this company and went on strike. The refinery is planning to lay off the company’s workers reducing their numbers from 6,000 to only 1,000.