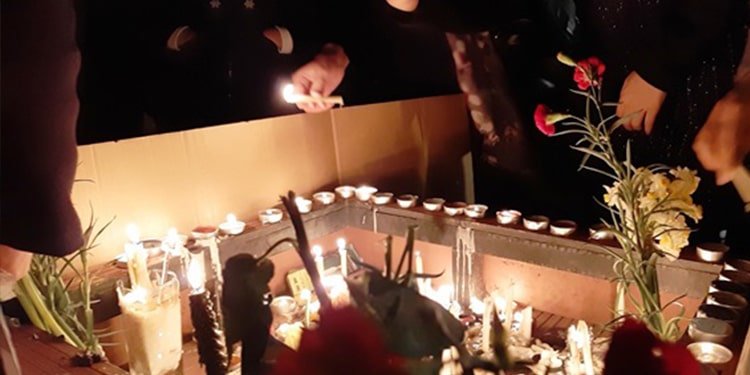 Jail sentences for lighting candles for victims of plane crash

The Amol Revolutionary Court issued jail sentences of a total of 88 months for 11 people for attending protests over the downing of a Ukrainian passenger plane in January 2020.

Three of the convicted protesters are women.

One of the reasons given for the guilty verdict was that they lit a candle in sympathy with the families of the victims of the Ukrainian plane crash in Ghaem Square, in the northern city of Amol. The verdict followed a series of sentences, issued by the regime’s judiciary, against the civil activists and protesters arrested during the November 2019 and January 2020 protests.

Demonstrations broke out after the Iranian Revolutionary Guard Corps (IRGC) claimed it had “unintentionally” shot down a Ukrainian airliner in January 2020, after denying responsibility for days. The regime’s missile attack against the passenger plane killed all 176 people on board.

Hundreds of people were arrested and several wounded during the protests, as state security forces fired live ammunition and tear gas to disperse demonstrators in Tehran and other cities.

Civil activist Shora Fekri was sentenced to six months in prison by Amol Court on April 21, 2020. She was also accused of attending a memorial service for the victims of the IRGC attack on the Ukrainian passenger plane.

Anis Saadat, a young writer and filmmaker, was among those arrested during the protests in Shiraz. She suffers from lupus and is in very poor health.

Despite the coronavirus outbreak, the Iranian regime continues to endanger the lives of activists by arresting and imprisoning them. Iranian prisons fall well below international standards, and poor health conditions and overcrowding are chronic problems.

The regime is taking no action to prevent the spread of the virus, nor to treat and quarantine prisoners.

For instance, 20 prisoners have contracted the coronavirus in Qarchak Prison (the state-run Khabaronline.ir – April 15, 2020). At Qarchak Women’s Prison, detainees include women accused of violent crimes and female political prisoners who were sent to the prison as exiles. At Qarchak, there is no separation of prisoners based on their alleged crimes in this facility, and political prisoners are held with ordinary and dangerous prisoners. The women arrested during the November 2019 and January 2020 protests in are being held in this prison, and have been denied leave.

Cheapest workforce: Plight of female workers in Iran under the mullahs