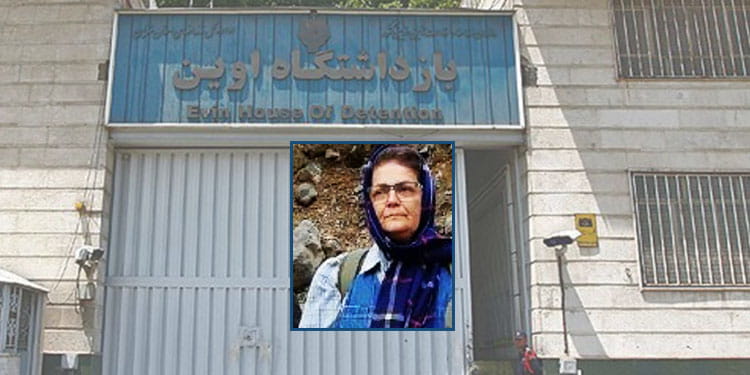 Retired teacher and political prisoner Nahid Fat’halian has been returned to the women’s ward of Evin Prison after completing her interrogations. Four months since her initial arrest, Ms. Fat’halian remains in custody in an undetermined status without being tried.

Political prisoner Nahid Fat’halian was arrested on April 14, 2020, by agents of the Ministry of Intelligence in Tehran. She was taken to the women’s ward of Evin after several days of interrogation.

On May 9, 2020, she was again taken to the Intelligence Ministry Ward 209 of Evin to continue her interrogations. It is reported that she was interrogated about publicity activities against the state. Some three weeks ago, she was eventually released from Ward 209 and returned to the women’s ward of Evin.

Nahid Fat’halian was one of the teachers’ union activists who rushed to the aid of flood victims in the Spring of 2019, in which she collected aid packages every day and played an active role in this relief effort.

The secretariat of the National Council of Resistance of Iran issued a statement on May 5, 2020, announcing the names of 18 detainees including Ms. Nahid Fat’halian from among many who had been apprehended in a wave of arrests. The common charge of those arrested was said to be “collaboration with an opposition organization (the People’s Mojahedin Organization of Iran).”

On the same day, Mrs. Maryam Rajavi, the President-elect of the National Council of Resistance of Iran, emphasized that the detainees were subject to torture, faced execution, and were in danger of contracting the coronavirus.

Mrs. Rajavi repeated her call on the Secretary-General of the United Nations, the High Commissioner for Human Rights, and the Human Rights Council, as well as the international human rights organizations to take urgent action to secure the release the detainees and to send international missions to visit the regime’s prisons and meet with these prisoners.

The Iranian Resistance declared that the clerical regime must publish the names of all the detainees and respect all their rights by the international conventions to which it is a party. Torture and ill-treatment of political prisoners are well-known practices of the regime.