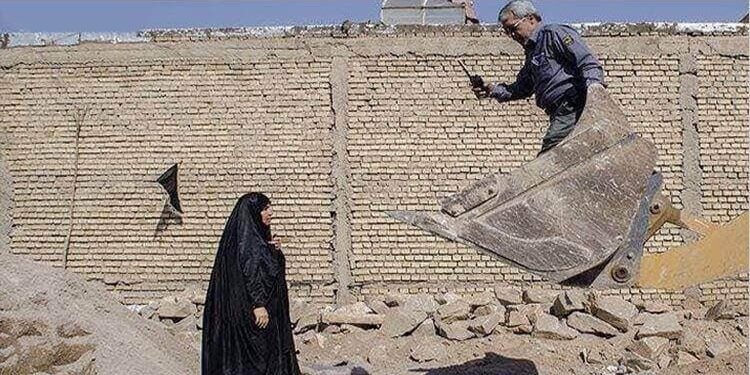 Rural women stand up to the brutal attacks by the clerical regime’s repressive forces in various parts of Iran.

The clerical regime’s State Security Forces and municipal officials suppressed local people and destroyed and robbed their property by attacking several villages in different parts of the country. The women were the main protesters and were beaten by regime agents but did not stop resisting. The rural women’s resilience was impressive.

Attack on the Zardoui Village of Paveh

On November 5, 2020, brave women in the Bayangan section of Zardoui village in Paveh resisted and clashed with State Security Forces (SSF), who had come to loot and steal the women’s livestock.

The repressive forces attacked the villagers and tried to seize herds of sheep from Kurdish retailers. The SSF fired randomly at the villagers. This SSF attack provoked a strong reaction from the people, especially women, whose resistance resulted in several SSF vehicles being destroyed.

Paveh is located in Kermanshah Province in western Iran.

Rural women stand up to demolition of houses in Golshahr

On October 30, 2020, at 2:00 AM, the municipality, in cooperation with security forces, attacked residential homes in the Golshahr neighborhood of Chabahar, in Sistan and Baluchestan Province in SE Iran.

The attack was carried out without a court order. Officers demolished about 10 homes that were occupied by residents. The security forces destroyed all the furniture. In response to residents’ protests, agents beat women and children with stun guns and batons and used pepper spray against them.

The following day (October 31), lower-income women in Chabahar protested the demolition of their homes. At a rally in front of the governor’s office in Chabahar, the women held placards with slogans such as “The right can be taken” and “We stand to the end.”

Rural women stand up to agents destroying their homes in Hajiabad

On October 30, 2020, the SSF, in collaboration with agents from the Housing and Urban Development Department in Hajiabad of Hormozgan Province, southern Iran, demolished houses that had already received construction permits and other official documents. Officers beat the women and youth who had protested, then arrested the youth and took them away. A brave woman in Hajiabad posted a video on social media, saying that the State Forces and urban housing agents attempted to destroy buildings that had construction permits and documents. “They destroyed the houses that had been built by paying for construction material that are so expensive. They badly beat up and brutalized the youth; they also beat the women. They destroyed our houses, and took away the young people.”

Attack on Ismailabad village in Mashhad

In another example, municipal officials, along with the Revolutionary Guards and the SSF, attacked Sunni citizens’ homes in the village of Ismailabad, Mashhad, on October 20, 2020. They beat women and children. Their goal was to destroy people’s homes. Residents of this area have been living there for 50 years. In an extortion scheme, regime officials told residents to pay one million Tomans for each meter they occupied.

The regime has repeatedly destroyed the houses of deprived villagers.

Asieh Panahi, a 58-year-old woman in Kermanshah, died after municipal agents beat her viciously. The housewife, a mother of seven – four daughters and three sons – suffered a fatal heart attack after the agents assaulted her with pepper spray.

Poverty and the lack of water and electricity in deprived and rural areas led to protests by women and other residents. On November 9, 2020, the families of Mahshahr workers protested against poverty and hunger. One woman said she buys meat once a year. Another mother said their baskets were empty, and that they could not afford to buy necessities. The young girls also protested not having access to the phones or computers they need to continue their education.

On November 8, 2020, a number of women protesters in Kohgiluyeh and Boyer-Ahmad Province, gathered in front of the governor’s office to demand that issues with water, electricity, and public services be resolved. The women’s messages included: “Our electricity is constantly cut off. We cannot wash our hands or bathe our children.”

In another protest rally on November 7, 2020, a number of residents from Chaharmahal and Bakhtiari formed a human chain at the police station on Farrokhshahr Road to protest the transfer of water from their province to other areas.

Their tracts and banners read, “Our only asset is our water and our soil; do not plunder them.”