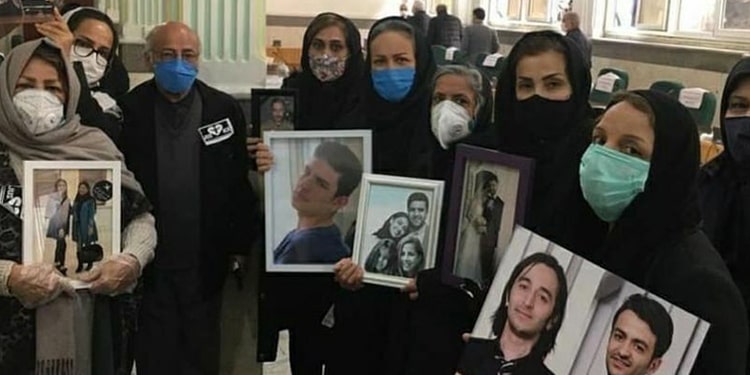 The people of Iran were still grieving over the loss of 1,500 martyrs in the November 2019 uprising when they suffered another harrowing pain.

The killing of 176 innocent individuals in the IRGC downing of the Ukrainian Airliner on January 8, 2020, in Iran left a deep scar on the conscience of the nation.

After three days of denials, the clerical regime acknowledged that “human error” was involved in the shooting down of the jetliner. The admission led to the outburst of angry protests spearheaded by women, which shook the country for several days.

At least 16 female students, and three female doctors and university professors were among the victims of IRGC’s downing of the Ukrainian Airliner.

The deliberate shooting down of the aircraft and killing of innocent human beings, is indeed an example of crime against humanity.

The people of Iran, particularly the families of the victims, will never forgive or forget this horrendous crime. They will continue to seek justice for the innocent victims.

Covering up the truth

In an unusual measure in violation of standard procedures, the regime immediately cleared the site and claimed that the crash was caused by a technical failure.

They did not hand over the plane’s black boxes for six months and failed to cooperate with international investigations.

After three days, however, the cover-up fell apart and the General Staff of the Armed Forces in a statement on January 11, 2020, admitted that the plane had been shot down because of a “human mistake.”

Touraj Dehghani Zangeneh, head of the regime’s Civil Aviation Organization, announced that the black boxes inside the cockpit were still recording the pilot’s conversations until 19 seconds after the first explosion and that both engines were still operating. (The state-run Mehr news agency – August 23, 2020)

This means that the passengers were still alive after the first missile struck the plane, and that the second missile had been fired deliberately.

A relative of one of the victims who lives in Dallas, Texas, told the AP, “Without knowing what really happened to them, we’re stuck in that same horrible night… We haven’t received anything close to the truth.” (The Associated Press – January 7, 2021)

Families of the victims intimidated

The Association of the Families of the Victims issued a statement on December 2020, revealing that the regime was stepping up pressure on the victims’ families as the anniversary of the plane crash was approaching. The statement said the Iranian regime’s officials were trying to fool the international community and cover up their crime.

Mr. Malek whose daughter Maryam was killed in the downing of the Ukrainian airliner said the regime had stolen the victims’ belongings. Maryam Malek graduated from Tehran’s Sharif University of Technology and was continuing her studies in Canada. He said the Iranian authorities were “putting up a show.” He questioned the officials and said: “Where are the belongings of our children which were collected by the State Security Force and the Police? Why did they crush their mobiles? Where are our children’s mementos?” (The state-run khabaronline.ir – December 18, 2020)

Javad Soleimani whose wife, Elnaz Nabii, was killed in the plane crash reported that the families of the victims had been summoned to the Intelligence Ministry and threatened with sexual assault. (Radio Farda – March 2, 2020)

Another measure the regime undertook to silence the families, was to announce a couple of weeks ago just before the anniversary of this crime, that it had considered 200 million Euros in the next year’s budget to pay compensations to the families of each victim, amounting to $150,000. But this item was later omitted from the budget.

Seeking justice for 176 innocents killed in the crash

The clerical regime has been trying up to this date to silence the families in Iran.

Although the families were pressured and harassed by intelligence services, but they have not stepped back.

The families of the victims are still seeking justice for 176 innocents killed in this crime against humanity. They issued a statement calling “shameful” the regime’s incomplete report on the downing of the jetliner.

The victims’ families see the IRGC as the main perpetrator of the crime. So, they announced that they seek nothing less than justice for 176 innocents and prosecution of those involved in this crime. They turned down the regime’s offer of compensations.

Despite being harassed, arrested and tortured over the past year, the families have not given in on their demand. They say, “The next step is prosecution of the murderers. We are going to be persistent on this demand despite having lost everything…”

The victims’ families held a protest against the presence of a negotiating team from Ukraine, outside that country’s embassy in Tehran and said that their first and last demand is “prosecution” of the perpetrators.

On January 7, the victims’ families went to the airport with flowers and candles and paid tribute to their loved ones. Then, they went to the site of the crash in Shahedshahr village and held a ceremony there. The State Security Force initially blocked the road to prevent this ceremony. But the families resisted and opened their way.

On the white and red balloons, they flew in memory of their loved ones, they wrote: We will never forgive or forget.

They wrote in their statement: “We believe that seeking justice for the perpetrators of this crime, is the biggest and most glorious tribute to the victims and their families.”