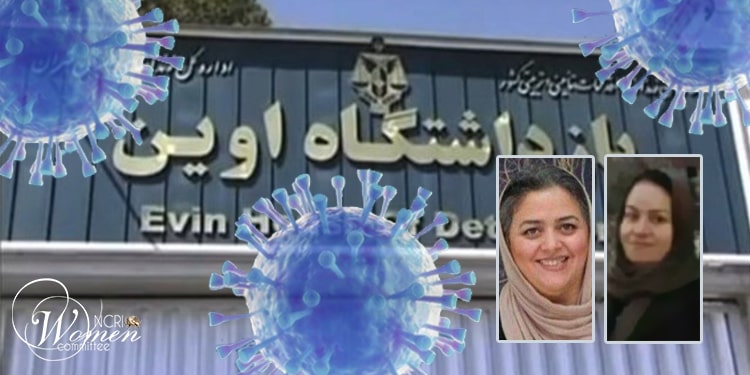 There are fears of a Covid-19 outbreak in Evin Prison’s women’s ward.

Just as most of the world has been vaccinated, the Coronavirus pandemic is ravaging the people of Iran with its variants. The People’s Mojahedin Organization of Iran (PMOI/MEK) announced on Tuesday, July 13, 2021, that the Coronavirus death toll in 547 cities had exceeded 328,400.

The situation in prisons is especially worse because of overcrowding and the lack of hygienic resources. There are fears of a Covid-19 outbreak in Evin Prison’s women’s ward.

The reports say other inmates also have symptoms of the disease but have not been tested, yet. Evin Prison authorities have failed to quarantine the infected prisoners or take preventive measures with regards to others.

Zeinab Hamrang, 50, is a retired teacher. She was arrested in the city of Khoy on August 31, 2020, as she was traveling with her daughter to West Azerbaijan. She was moved to Evin Prison in Tehran on September 5, 2020, to serve her prison sentence. She has been sentenced to 6 years in prison for alleged “assembly and collusion against national security” and “propaganda against the state.”

It was reported in early June that another retired teacher, imprisoned in Evin, Nahid Fat’halian had tested positive for the Covid-19. But Evin Prison authorities did not test other prisoners.

Prison authorities took Mrs. Fat’halian to a separate room, but they did not provide medical care for her. Inmates in Evin gave her food and fruits as much as their limited resources allowed.

Mrs. Fat’halian contracted the Covid-19 after she was taken to a civic hospital to do some tests. A few days later, she demonstrated symptoms of the Covid-19. There were fears among prisoners that they could all contract the Covid because they were in direct contact with her.

With two more inmates testing positive, it becomes clear that the fears were not baseless and the chances are high for a Covid-19 outbreak in Evin and in the women’s ward.

The Iranian Resistance calls for the release of prisoners, particularly political prisoners until the Covid-19 pandemic is over.