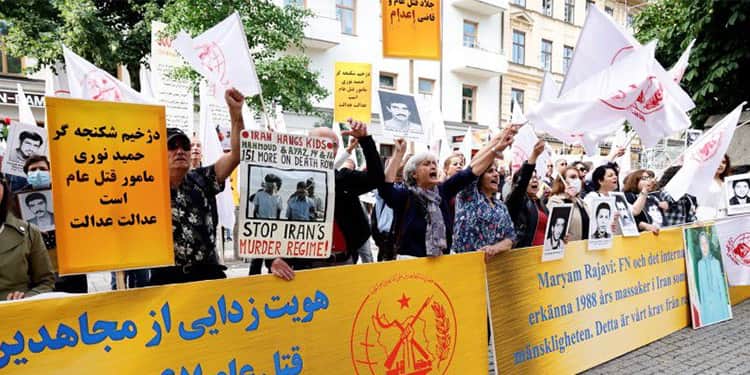 Some of the former political prisoners, families, and witnesses seeking justice for the 1988 massacre in Iran made speeches in a gathering near the Court of Stockholm where Hamid Noury, one of the perpetrators of the 1988 massacre, is on trial. Following are excerpts of some of their speeches on August 12, 2021.

Ms. Mehri Omrani is a former political prisoner from the 1980s and one of the witnesses seeking justice for the 1988 massacre. In her speech to a gathering in Stockholm on August 12, 2021, she said, “The efforts of the Iranian Resistance and thousands of hours of work by the PMOI/MEK finally defeated the mullahs’ Intelligence Ministry. The PMOI sent a list of former political prisoners and witnesses of the massacre to the Swedish Judiciary and international human rights authorities. Through these efforts, 22 of the witnesses of the crimes of Hamid Noury in the death corridor and first-degree relatives of the victims filed complaints against him. The case of this executioner is full of shocking testimonies by the PMOI.

“I was imprisoned for eight years from 1983 to 1991 in Tehran’s Evin and Mashhad’s Vakilabad prisons for supporting the PMOI/MEK. I am one of the witnesses and one of the survivors of the 1988 massacre. In the Vakilabad Prison of Mashhad, I witnessed the massacre of many prisoners, including my brave cellmate and friend. I also saw that Shirin Eslami, who had two daughters, was hanged at 50.

“We urge Western governments, the United Nations, and the UN Security Council to stand by the people of Iran in this dark era of oppression, hunger, and thirst. We urge them to continue the punishment of Hamid Noury with the prosecution of Khamenei and reject his sanguinary regime from the international community. The Iranian people demand the prosecution of all of the regime’s executioners.”

Behnaz Attarzadeh, seeking justice for victims of the 1988 massacre

Behnaz Attarzadeh is the sister of two victims of the genocide carried out in 1988 in Iran. Addressing the gathering of protesters seeking justice for the victims of the massacre, she said, “I am the sister of two PMOI prisoners massacred in 1988, Mohsen and Behrouz Attarzadeh. Behrouz was only 16 when he was arrested. He was imprisoned for seven years in Evin and Qezel Hessar prisons without receiving a verdict. He was finally hanged in the summer of 1988 along with 30,000 other PMOI prisoners.

“Mohsen Attarzadeh was imprisoned in Vakilabad Prison in Mashhad. He had a sentence of 10 years. He had served three years of his sentence when he was hanged with other PMOI prisoners in the summer of 1988.

“In 1988-1989, my mother took the pictures of the two victims to Reynaldo Galindo Pohl, the UN Special Rapporteur on Human Rights in Iran. She said, ‘It is one year that my two sons have disappeared, and we urge investigation about this.’ My mother said she was not the only mother, but there were other mothers. They wanted to go there but were arrested by the criminal regime to cover up this crime. A family who was seeking justice asked a young man passing by to translate their letter into English. The family and the young man were all arrested.”

The mother who never received the body of her son

Mother Hamdam was another speaker at the gathering in Stockholm on August 12, 2021. She told the rally, “I am the mother of Sassan Saeedpour, who was arrested on October 21, 1981. The regime announced that he had been killed in a street clash. I looked for him everywhere to receive his body but to no avail. After three months, we found out that he had been regularly tortured and possibly been killed under torture. I have nothing of him. They did not give us his last will. I have only one poem from him that prisoners have passed along by word of mouth.”