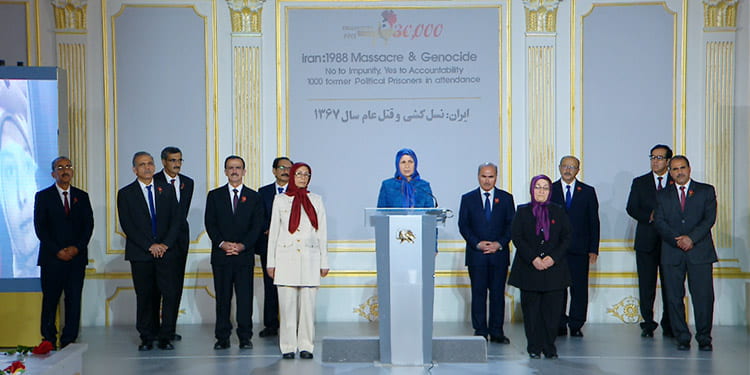 A delegation of 12 plaintiffs against Hamid Noury

More than a thousand former political prisoners and families of the victims of the 1988 massacre participated in an online conference on August 27, 2021. The conference entitled “Iran: 1988 Massacre & Genocide; to Impunity, Yes to Accountability,” marked the 33rd anniversary of the 1988 massacre in Iran. Some 2,000 locations were connected to the conference. One thousand former political prisoners, members of the Iranian opposition People’s Mojahedin Organization of Iran (PMOI/MEK), attended the conference at the museum of the Iranian Resistance at Ashraf-3. They experienced imprisonment and torture under both dictatorships of the Shah and the mullahs.

Several former political prisoners and relatives of the victims of the 1988 massacre addressed the online conference, relaying their experiences and testifying against the crimes of the clerical regime. The extraordinary gathering is the tip of a pyramid in Iranian society, with hundreds of thousands of tortured prisoners and the families of 120,000 who laid down their lives for freedom.

In part of the conference on 1988 Massacre & Genocide, Ms. Mehri Hajinejad, a political prisoner of the clerical regime for 4 years and 8 months, appeared among a group of Mojahedin prisoners who are the official plaintiffs in the trial of Hamid Noury at the Court of Stockholm. Ms. Hajinejad introduced them all and explained the history of their families.

Ms. Mahnaz Meymanat is one of the plaintiffs. Four of her relatives, including her mother and two brothers, were killed by the inhumane clerical regime. Her brother, Mahmoud Meymanat, was hanged in Gohardasht Prison of Karaj in the summer of 1988.

Khadijeh Borhani is another plaintiff who attended the conference. The inhuman clerical regime executed her six brothers and a sister-in-law. The Borhani family is one of the documents of the regime’s genocide. Mohammad Mehdi Borhani, Khadijeh’s brother, was a prisoner during the Shah’s reign. He was killed under torture in 1982. Her other brother, Mohammad Ali Borhani, was executed in Qazvin in September 1981. Ahmad and Mohammad Hossein were hanged in Gohardasht Prison in 1988 after enduring much torture. At the same time, Minoo Mohammadi, Mohammad Mehdi’s wife, was hanged in Qazvin Prison.

Ms. Hajinejad also shared her own experience of the clerical regime’s dreadful prisons: “I was imprisoned for almost five years in the Khomeini regime’s dungeons. Four of my relatives, including my three brothers Ahad, Samad and Ali Hajinejad, were executed by the mullahs’ criminal regime. When I was in jail, my interrogators tried to convince us that we were alone and that no one outside was supporting us. But freedom-loving people like you did not allow this inhuman regime to advance its deceits.”

Sima Mirzaii with 14 of her relatives executed

Ms. Sima Mirzaii, a relative of the victims of the 1988 massacre, was one of the witnesses who spoke at the conference on the 1988 Massacre & Genocide. In part of her remarks, she said, “Fourteen of my loved ones were executed by the clerical regime. My sister Khadijeh was arrested in 1981 and constantly tortured for two months. During a brief visit, she told my father that what the regime wanted from her was a letter and a television interview against the PMOI/MEK. But she said, ‘They will take this wish with them to their graves.’ Khadijeh stood firm as a mountain and died under torture.”

Seven of my loved ones, my two brothers –Hossein and Mostafa, my sister, Massoumeh, my sister-in-law, Mahnaz Yousefi, and three of my relatives, were hanged in the summer of 1988 after enduring seven years in prison and under torture. They were among 30,000 heroic political prisoners massacred that summer. Those who never gave up their ideals and beliefs and kissed the noose with chants of “long live freedom” and “hail to Rajavi.” I cannot find words to describe their courage. My brother Hossein spent half of his 7-year sentence in solitary confinement under torture. I cannot explain how his wife, Mahnaz, was hanged from the gallows, leaving behind her little daughter, who was forever deprived of her mother’s warm bosom. My sister, Massoumeh, had finished serving her five-year sentence the year before. But she was not released. The criminal Judge Salavati said: ‘If we release her today, she will be with Massoud Rajavi in ​​Ashraf the next day. We will keep her in prison until her hair turns white like her teeth.’

As Ashraf Rajavi said, ‘the world never learned of what happened to the Iranian people and the PMOI/MEK.’ My parents cried and cried alone at night but stood up to the executioners and supported their children’s beliefs. Together with their young grandchildren, whose parents were imprisoned, they traveled from Evin Prison to Ghezel Hesar and from there to Gohardasht Prison in the heat and cold to visit their children. Most of the time, the prison authorities did not allow them to visit their children. And their grandchildren came back home crying. The blood-thirsty (Assadollah) Lajevardi used to tell my father: “I must burn your roots because you have raised several PMOI members and handed them over to society.”

A physician imprisoned for five years

Dr. Khadijeh Ashtiani was a political prisoner of the clerical regime for five years. In her remarks at the conference, she spoke about what happened during the 1988 massacre and the crimes of Hamid Noury. Dr. Ashtiani said: “I was in prison for 5 years. In the beginning, we were not blindfolded in Ghezel Hesar prison. So, I frequently saw Hamid Noury, who always accompanied Nasserian or Moghiseh.

“Today, I have come call for justice for victims of executions. Part of these victims were the 30,000 massacred in 1988. My brother was one of them. He was arrested and sent to prison at the age of 19 for supporting the PMOI/MEK. On May 17, 1988, Hamid Noury and Nasserian called out 120 people from different wards and sent them to Evin Prison. During the transfer, the prisoners passed through a tunnel of revolutionary guards who brutally kicked and beat them one by one.

“At the time, we heard that these people had been transferred to Evin to be executed. But we did not want to believe it. During his last meeting with my mother on July 25, 1988, Ali, my brother, told her that the prison authorities had taken away their TV for two days. They had closed the doors of all the rooms and did not give the prisoners any food. The guards had told them: ‘Since we will execute all of you anyway, you do not need to eat.’

“The regime took all these measures before the PMOI’s Eternal Light Operation. This shows that the massacre of political prisoners had been planned. Then, all the visitations were canceled. We used to go to Evin Prison until November 1988 to inquire about my brother. Finally, on November 18, 1988, the Revolutionary Guards came to our house and told us to go to the Tehranpars committee to get his bag. This is how we found out that my brother had been executed.

Those days, there was no modern communication. In every street, some families had lost a member. Their voice, however, did not reach anywhere, and the world did not know what happened to the Mojahedin and their families. But today, fortunately, with Maryam Rajavi spearheading the Call for Justice Movement, the issue has become global, and we have supporters like you.”

Former political prisoner Parvin Koohi was also among the speakers at the 1988 Massacre & Genocide conference.

Parvin Koohi spent 5 years and 6 months in the dungeons of the clerical regime.

She explained to the conference, “I was in Evin and Gohardasht prisons for about five and a half years. I spent one year in solitary confinement. In September 1987, after I received my sentence, I was transferred to Dastgerd Prison in Isfahan.

“During my imprisonment, I witnessed large-scale executions. Some nights in Evin, I could count up to 600 coups de grace. This was Khomeini’s policy because he saw his survival in the demise and annihilation of the PMOI/MEK to the last person.

“As you are aware, in addition to Tehran, the massacre took place in all other cities. I want to testify about the massacre of my sisters in Dastgerd Prison in Isfahan.

“Upon arrival in Isfahan Prison, I was sent to solitary confinement for a while. After I was transferred to the public ward, I was surprised by the small number of prisoners, especially compared to the number of prisoners in Evin. I asked everyone the reason. They said some people who had been sentenced to death had been executed. Some had been released, leaving only about 12 people in the ward. Some of these prisoners were members of other groups and were released by Nowruz in 1988. So, there remained only 9 prisoners who supported the PMOI/MEK. Since just a few of us were there, they took us to ‘the old ward,’ which had a tiny yard and a couple of rooms.

“It was July 29 or 30, 1988, when they blindfolded the nine of us and called us to a room outside the ward. They asked us some questions. When I returned, I realized that seven of us had not returned. I later heard from the prison guard that they had been executed. This news shocked me. I did not know what was going on because the visitations had been cancelled and we did not have a radio, television, or newspapers. After three or four months, the ban on visitations was lifted and I found out through my family that extensive executions had been carried out in Tehran and other cities. They told me that the victims of Isfahan had been buried in the Garden of Rezvan.”

We will not forgive, nor will we ever forget

Now, 33 years after the massacre of 1988, the victims’ message resonates in the Call-for-Justice Movement, in the popular uprisings, and the determination of the Resistance Units inside Iran.

The Iranian people will not give up their rightful desire for Iran’s freedom and the prosecution of the regime’s supreme leader, Ali Khamenei, his president, Ebrahim Raisi, and other executioners occupying the seats of power in Iran. We will not forgive, nor will we ever forget.