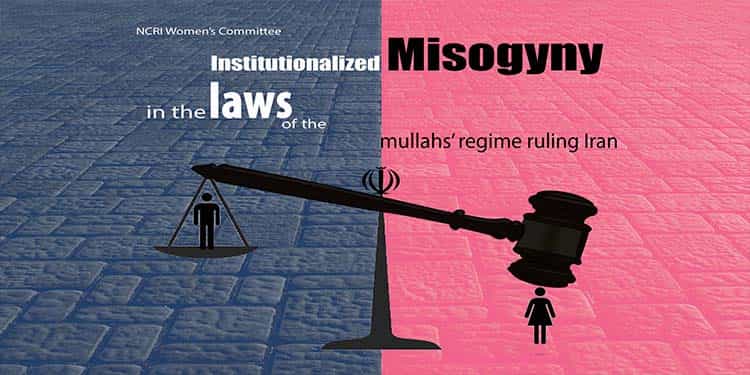 Institutionalized misogyny in the laws of the mullahs’ regime ruling Iran

Hello everyone. Welcome to another episode of the podcasts produced by the NCRI Women’s Committee.

In this episode, we are going to discuss institutionalized misogyny in the laws of the Iranian regime.

The Iranian people have lived under a religious dictatorship for more than 40 years. Misogyny and discrimination against women are inherent to the mullahs’ clerical regime.

In one of its key publications, “Institutionalized misogyny in the laws of the mullahs’ regime ruling Iran”, the NCRI Women’s Committee explains and proves that misogyny is not a culture, but a function of the regime ruling Iran. Misogyny is advanced through legislation of various laws and enforced by various government agencies.

These misogynistic laws are the root cause and the underlying source of oppression and elimination of women from social, cultural, athletic, artistic, and other fields of activities. These laws violate their rights and promote violence against them both in society and family life.

The mullahs’ Constitution was drafted and adopted in 1979; that is the same year they seized power.

The Constitution identifies women with motherhood and regards childbearing and rearing children as their first and foremost duty.

Part of the introduction to the Constitution reads, “Women regain their crucial and invaluable duty of motherhood in raising vanguard, ideological human beings, while they, themselves, are comrades of men in active fields of ‘life’…”

So, from the mullahs’ standpoint, a woman is simply defined as a mother whose duty is giving birth to human beings who adhere to the ruling regime’s ideology.

Their pure being as a human with specific social, civil, and political rights was not even worth to be mentioned in the Constitution.

The other thing is that the constitution considers women alongside men in social activities, not equal to them but at the service of “life”! Here you can see that the Constitution implies that the family, as the founding unit of society, must also adhere to the ruling clerical regime.

Principle 21 on “women’s rights” points out that the “Custody of children is granted to qualified mothers to protect the children’s interests in the absence of a religiously-designated guardian.”

Paragraph 5 of this principle legalizes another obvious discrimination against women. The paragraph says that despite all the efforts of a mother to raise her child, a child’s guardian is first, the father, then the grandfather. If they do not exist, and if the mother was qualified according to the mullahs’ backward criteria, then she could have custody of her child.

Here is an example. A little girl only 9 years old can be married off to a much older man upon the consent of her father, or paternal grandfather if a judge approves it.

She must live wherever her “husband” wants, and she doesn’t have the right to leave the house, or work and travel without her husband’s permission.

It is clearly stated in Article 1114 that a woman must live in the house that the husband determines.

The husband can prevent the woman from working or having a profession he does not like, under the pretext of being “incompatible with the interests of the family.”

As to why it has become a social catastrophe, one must point out the policies of the mullahs’ regime and the fact that child marriage is a category of violence and institutionalized misogyny in the laws.

Another example of misogyny in the laws of the Iranian regime concerns “divorce.”

According to Article 1105 of the civil code, the family is headed by the husband.

According to Articles 1122 to 1130, a man can divorce his wife for any reason, including various diseases and blindness from both eyes. Even if those conditions existed for the woman at the time of marriage.

He can even divorce his wife without informing her.

In contrast, the civil code puts numerous conditions and complexities on the way of a woman seeking a divorce.

In addition, when the husband and wife separate, the custody of children older than 7 years is granted to the father.