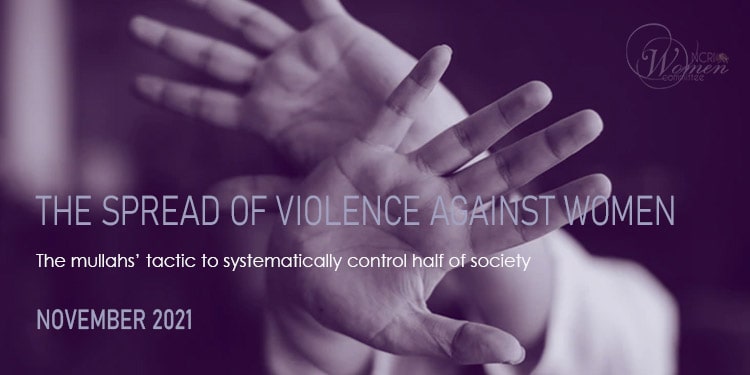 The Iranian Judiciary covers up violence against women

In today’s Iran, we witness the constant spread of violence against women. We learn increasingly horrendous facts every day. The authorities attempt to cover up cases of violence against women, but in many instances, these cases are too obvious to be neglected. The clerical regime’s failure to prosecute the perpetrators fully and its eagerness to release them indicates that it is taking advantage of this situation.

Repression is one of the two main pillars that drive the clerical dictatorship’s survival. Consensus on the repression of women reigns highest for this regime.

The clerical regime has not signed the Convention on Elimination of All Forms of Discrimination Against Women (CEDAW). Repression in Iran primarily targets women, thereby controlling all society. Iran’s regime is the number one executioner of women in the world. State violence perpetrated against women, under the pretext of the political situation or Hijab, etc., is several-fold more intense than the social or domestic violence that women experience.

Ebrahim Raisi, a mass murderer responsible for a vast number of political executions, is in power. Under his rule, the prospects for better conditions for women seem less feasible than ever before.

In this pamphlet, you will read about:

Assailant shooting women in bright day light is at large

In the last two years, we have witnessed a steady stream of the brutal and merciless killings of women. These events, whether under the pretext of honor killings or family disputes, all point to the fact that the men of Iranian society, under the rule of so-called clerics, rely on the law that recognizes men as heads of households and the owners of women.

Such laws, and the dominant misogynous culture, open the door to men to exact revenge from the women in the family in the face of any economic or social pressure. Moreover, violence against women has never been criminalized under this regime and is deliberately ignored by the Judiciary.

According to research conducted by Parvin Zabihi, a women’s activist in Marivan, Kurdistan, during the last 20 years, 1,200 women have been subjected to “honor killing” in Iran. “The law is written by men, and the culture is the product of a patriarchal and classist society,” she stated (The state-run Salamatnews.com – October 23, 2021).

In an article published on November 19, 2020, on the state-run Jahan-e-San’at website, Mohammad-Reza Mahboubfar, a regime social pathology expert, wrote, “Iran ranks first when it comes to domestic violence.”

“Currently, social harms are sweeping the country, and no home is safe in Iran,” Mahboubfar added.

Then he revealed horrendous figures, “If this trend continues, the number of honor killings in the country, 450, could increase to 2,736 cases by the end of the year” (The state-run Jahan-e-San’at website – November 19, 2020).

According to Article 220 of the Islamic penal code, “If a father or grandfather from the father’s side kills his child or grandchildren, he will not be subjected to “Qesas,” (i.e., Retribution) but he must pay the blood money and will be lashed.”

A bill tangled among political views

Women’s rights activists have succeeded in bringing the issue of the spread of violence against women in Iran into the social discourse. A bill aiming to prohibit violence against women was under discussion until Romina Ashrafi, 14, was beheaded by her father on May 21, 2020. In response to the public outcry, 24 days after Romina was killed, Rouhani, then-president of the clerical regime, rushed to the scene and hypocritically ordered the passage of a bill titled, “Protection, Dignity, and Security of Women” (The state-run IRNA news agency – June 13, 2020).

The Judiciary had referred the bill to the government in the late summer of 2019. The Judiciary not only changed the title of “Prohibition of Violence Against Women” to “Protection, Dignity, and Security of Women,” it also omitted 15 articles in the original bill, thereby changing the intent. Then-MP, Parvaneh Salahshoori, called the bill a “lion without mane, tail, or belly” (a Persian expression meaning good-for-nothing or of no use) and admitted that it would not be of any help regarding the spread of violence against women. According to Salahshoori, “If this bill is passed, women will sink into a more horrendous situation.”

Nonetheless, the bill stalled for 16 months under the Rouhani government. Eventually, on January 14, 2021, Rouhani’s parliamentary deputy, Hossein-Ali Amiri, announced that the bill had been introduced in Parliament.

The bill has been shelved in Parliament for 10 months and is not given any priority. In fact, with every report of shocking violence against women and murder, the bill has passed from one parliamentary commission to another.

According to Ali Mojtahedzadeh, a lawyer, “the bill of ‘the Prohibition of Violence against Women’ is tangled among political views” (The state-run ILNA news agency – October 19, 2021).