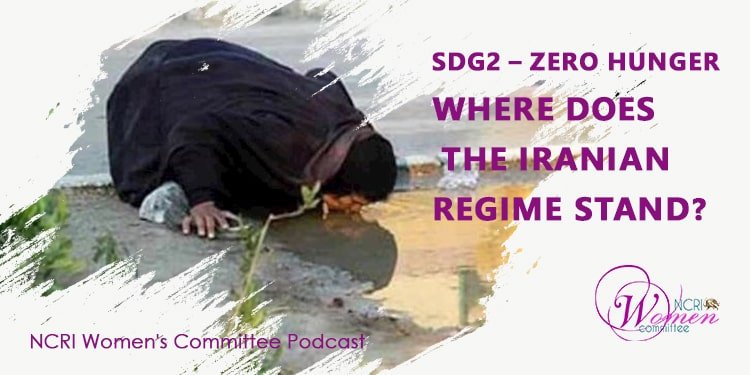 This time, we’re going to explore the NCRI Women’s Committee report to the UN Beijing +26 summit.

This 300-page report comes in nine chapters and reviews the conduct of the Iranian regime 26 years after the Beijing Conference on Women’s rights.

We aim to review the parts of this report covering the Iranian regime’s measures concerning the Second Sustainable Development Goal of the UN, known as SDG2.

SDG2 aims to achieve “zero hunger.” It is one of the 17 Sustainable Development Goals established by the United Nations.

No hope to eradicate poverty in Iran by 2030

Ali Khamenei, the mullahs’ supreme leader, controls all the mega institutions directly or through his Revolutionary Guard Corps, the IRGC.

They plunder the nation’s wealth and all its natural resources and pocket their revenues.

After 43 years, the mullahs have brought nothing to the Iranian people except death and destruction.

We see Iran rated as one of the unhappiest nations where 80% of the nation lives below the poverty line.

The middle class has all but diminished and the vast majority of the Iranian people live in poverty despite the country’s immense national wealth and oil reserves.

Experts say one-third of low-income families in Iran that is around 5 million people, who earn only 1 million Tomans a month, that’s only $30, are living in extreme poverty and hunger.

Then, 67% of the population lives below the relative poverty line.

The situation of women concerning SDG2

Most social ills in Iran have taken up a feminine face. Poverty is feminized. Addiction, suicides, and homelessness are also feminized in Iran.

There are numerous other ills involving women and girls, including a large number of runaway girls, prostitution and human trafficking, sale of body organs, sale of infants, and so on.

Many of the Iranian regime’s officials and experts on social harm use the term, “the feminine face,” indicating that women are the prime victims of that social ill.

For example, they once said more than 64% of impoverished families in Iran are female heads of households. 50% of panhandlers in Iran are also women.

Poverty is directly related to hunger and SDG2. Now, there is a feminine face to poverty in Iran.

Why? Because there is vicious discrimination against women in the job market.

More than 32 million women are eligible to work, and only 4 million are economically active.

Throughout the years, women’s employment rate in Iran has been 12%, at best.

That means 87-88 percent of women in Iran have no role to play in the economy and no source of income.

The job market is strictly male-dominated. For every 100 men, only 22 women have some form of employment in Iran.

80% of the Iranian population lives under the poverty line!

But people have become extremely poorer since 2017. And these numbers must be considered the minimum.

The consumption of red meat has decreased by 65% and rice by 34%.

Many of the basic food staples have been removed from people’s food baskets because of low salaries, inflation, and high prices.

Most recently, with the hike in the price of macaroni and bread, there was an outburst of widespread protests across the country. Because people no longer afford a loaf of bread.

Food security, as defined by the United Nations’ Committee on World Food Security, means that all people, at all times, have physical, social, and economic access to sufficient, safe, and nutritious food that meets their food preferences and dietary needs for an active and healthy life.

The vast majority of the people of Iran are malnourished.

They do not have access to sufficient nutritious food they need. Because not only the basic staples, but almost all food items are beyond people’s purchasing power.

For example, for a long time, dairy products, legumes, eggs, and poultry have become a luxury for most Iranian families.

One can see on social media how citizens line up to try and buy cooking oil before stores completely run out.