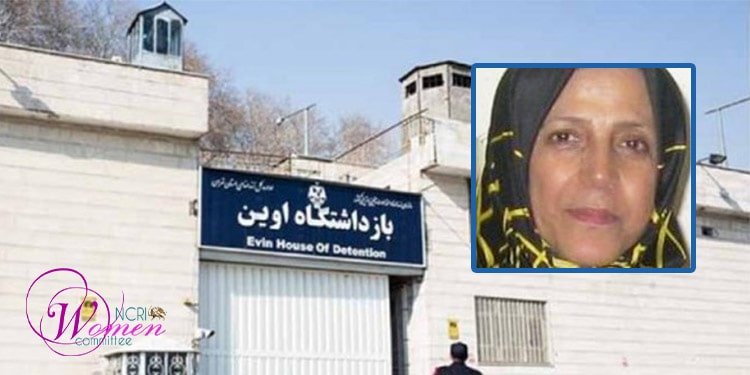 Fatemeh Ziaii Azad is detained for the sixth time

Political prisoner Fatemeh Ziaii Azad (Hoorieh), a supporter of the People’s Mojahedin Organization of Iran (PMOI/MEK), has been arrested for the sixth time.

To contain growing social protests and terrorize the public, the misogynist clerical regime in Iran has started another round of arresting former political prisoners.

Agents of the Intelligence Ministry broke into her residence on September 10, 2022, and arrested Fatemeh Ziaii Azad. They confiscated her mobile phone and other belongings and took her to Ward 209 in Evin Prison.

Mrs. Ziaii Azad had guests when the intelligence agents broke in; the guests were also filmed, and their mobiles were inspected.

Fatemeh Ziaii Azad is 65 and formerly served five years (1981-1986) on charges of supporting the PMOI and spent time in the Residential Unit, where PMOI women were viciously tortured.

She was also jailed in 2009, 2013, 2014, and 2019. Fatemeh Ziaii Azad has Multiple sclerosis (MS) and a dire physical condition, requiring urgent medical care. Her two daughters are members of the PMOI/MEK.

Zeinab Hamrang has gone on hunger and medical strike in Evin Prison since September 14, 2022. Political prisoner Zeinab Hamrang is protesting the violation of the principle of separation of crimes in the women’s ward of Evin Prison and the violent beating of prisoners.

Zeinab Hamrang, 46, is a retired teacher suffering from high blood pressure and heart and kidney problems. Her life is at risk with days passing from her hunger and medical strike.

Several female agents beat Zeinab Hamrang and dragged her to the floor to put her in a quarantine cell. The agents who abused and tortured Zeinab Hamrang were Qassemi, Esmaili, and Fekri.

An informed source said, the authorities have set six conditions to bring her back inside the ward. The source did not have clear information on the conditions.

Political prisoner Zeinab Hamrang is a retired teacher. She was among inmates who tested positive for Covid-19 in July 2021. However, the Iranian Judiciary officials refused to grant her medical leave.

The Revolutionary Court of Tehran has sentenced Mrs. Hamrang to 5 years in jail for “assembly and collusion against national security” and an additional one year for disseminating “propaganda against the state.”

Zeinab Hamrang is from Ardabil and was arrested in early September 2020 in Khoy, West Azerbaijan Province, while on travel. She was subsequently transferred to the women’s ward of Evin Prison in Tehran on September 5, 2020, and remains captive there.

The death of Mahsa Amini provokes angry protests in universities