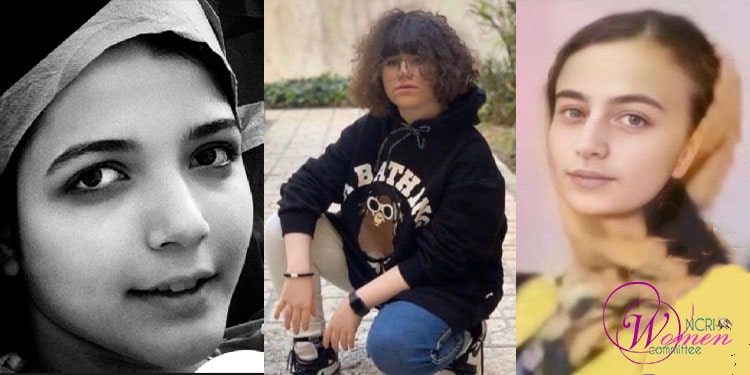 At least 50 children, including two 8-year-olds and a 2-year-old, have been killed by security forces in Iran

November 20, World Children’s Day, coincides with the 40th-day memorial of Asra Panahi, a 15-year-old girl from Ardabil, who was severely injured under the brutal beating of plainclothes agents and later died in the hospital.

Asra Panahi studied at Shahed high school in Ardabil. On Monday, October 13, 2022, she and her friends refused to sing an anthem praising Khamenei. Instead, they chanted slogans against the clerical regime.

The school’s principal called the security forces and plainclothes agents to help calm the protesting students. And as soon as they arrived at the school, they treated the young girls and teenagers the way they do in prisons with political prisoners and arrested protestors. At least ten girls were injured, but the conditions of Asra and another girl named Aytak, who went into a coma, were the worst.

Young people in Ardabil held protests on Day 65, Saturday, November 19, 2022, to commemorate the innocent young woman, Asra Panahi, on the 40th day after her loss.

Since the day Asra was murdered until Saturday, November 19, 2022, dozens of other high school girls have died or been seriously injured in the same way.

At least 50 children under 18, even two 8-year-olds and one 2-year-old child are among the innocent victims of the regime’s security agents.

Among them was Parmis Hamnava, a ninth grader at Parvin Etesami High School in Iranshahr, Sistan-and-Baluchestan province. Parmis Hamnava was beaten by security agents at school for tearing Khomeini’s picture; she later died of severe injuries.

Another similar case concerns Arnika Qaem Magham, 17. She was kept in a military hospital in Tehran due to consecutive blows of a hard object (i.e., a baton) to her head and the breaking of a neck disc. The government says she threw herself from the fourth floor of a building.

The latest victims of the systematic killing of children were Kian Pirfalak, 10, Artin Rahmani, 14, and Sepehr Maghsoudi, 14, in Izeh, Khuzestan. Another teenager was Danial Pabandi, 16, who was killed in Saqqez, Kurdistan.

The Iranian Resistance and the NCRI Women’s Committee have already urged the UN and the UN Security Council to intervene immediately to stop the systematic killing of children in Iran. On World Children’s Day, we once again renew this call.

The case of Hasti Hossein Panahi

On the eve of World Children’s Day, let’s review the fate of another victim of the brutal beating of security forces in Iran. Hasti Hossein Panahi, a 16-year-old Kurdish student from Dehgolan, has been in a coma since November 10.

Some reports on social media indicate that Hasti was seriously injured during the Dehgolan protests when security forces beat her in the head with consecutive blows of the baton. She was subsequently transferred to the Kowsar Hospital in Sanandaj, the capital of Kurdistan.

It was there, at the department, where she was beaten up by batons to the point of death. Then, her half-dead body was transferred out of the department by a bus and thrown out in the street. Then the authorities declared that she wanted to commit suicide and jumped out of the bus despite efforts by her friends and the driver to prevent her.

Security forces pressured Hasti’s family to say their daughter had committed suicide due to depression. They did this to Asra Pnahi’s family, but they have not forced the family to give false testimonies.

Day 65 of the nationwide Iran uprising

On Saturday, November 19, 2022, Iranian students held sit-ins and protests in 29 universities in Tehran and other parts of the country, bazaar merchants and shop owners closed their shops, and high school students held protests in the streets to mark Day 65 of the Iranian people’s nationwide uprising.

Saturday marked the fifth day of commemorating the anniversary of the November 2019 uprising by continuing the path of those who laid down their lives for freedom. Protests in different areas of Tehran and different cities, including in the west and northwestern Iran, continue until late at night.

The students of Melli University staged a large demonstration.

The students of Medical Sciences, Art, and Azad universities of Tabriz went on strike with the slogans “We are all Aylars, fight, and we will fight back,” “I will kill whoever killed my sister,” and “Basij, IRGC, you are ISIS.”

Students of Isfahan University of Technology, Najaf Abad Technical College, Gilan University’s Central Campus, Shiraz University, Sanandaj University of Medical Sciences, etc. held sit-ins and strikes with chants of “We pledge to our fallen friends that we will stand to the end,” “Death to the child-killing regime,” “Our friends did not sacrifice for us to comprise with the murderous leader,” etc.

The families of arrested students gathered outside the Security Department of the Razi University of Kermanshah, chanting, “Where are our children?”

Courageous high school students demonstrated in Baneh, western Iran, with chants of “Khamenei is overthrown this year” and in Bandar Abbas, southern Iran, with the slogan “We are all Aylars, fight, and we will fight back.”

Women and young girls were at the forefront of all these protests.

On International Children's Day: Call on Security Council, European Union for immediate action to stop killing, and to release detained