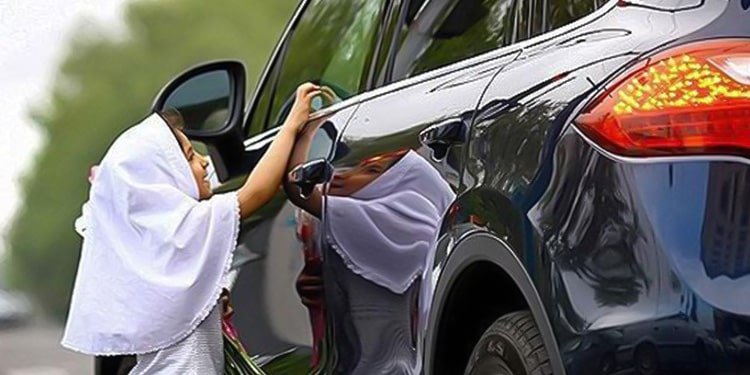 The International Labor Organization has declared June 12th as the World Day against Child Labor to raise public awareness about this global issue and prevent child labor. The population of child laborers in Iran, however, has been constantly on the rise due to the unbearable levels of poverty, rampant under the rule of the clerical regime.

To provide some visual context of what is going on in Iran, one only needs to look at the day of a child who is on the street selling handmade crafts at busy intersections. They begin their days as early as 5 a.m. not knowing where they will find themselves nor when it will come to an end.

According to Zahra Sa’ii, a member of the regime’s parliament, “A large number of [these children] are being sent to large metropolitan areas by their families who are often from the low-income sectors and (socio-economically) disadvantaged regions” (The state-run Khaneh Mellat website- July 14, 2019).

In February, at the height of the Covid-19 outbreak in Iran, a disturbing clip was released on social media showing a young child, no more than 7 years old, walking down a street collecting garbage. When asked why he was out at such an unpredictable time, he replied bitterly, “I’m doing business… We have nothing at home… We don’t have rice and oil… We’re starving.”

In September 2017, Nahid Tajeddin, a member of the Board of Director of the parliamentary Social Affairs Committee, estimated the number of child laborers in Iran were between 3 to 7 million and emphasized “that no accurate statistic can be provided in this regard since most child laborers do not have registered identity papers” (The state-run salamatnews.com, September 27, 2017).

Zahra Sa’ii, a member of parliament, would add in 2019: “Unfortunately, in Tehran, the population of these children has been on the rise” (The state-run Khaneh Mellat – July 14, 2019).

IRNA, the regime’s official news agency, also underlined the “growing population” of child laborers in Iran in a recent report on June 1, 2020. Despite the growing numbers of child laborers in Iran, the ruling regime and its relevant agencies have no practical or effective plan to deal with this issue as “the problem of child labor is not among the regime’s top priorities” (The official IRNA news agency –  June 1, 2020).

“Lack of sufficient funds” is also another reason for the failure of government agencies to cope with this issue. (The state-run Khaneh Mellat – July 14, 2019).

To justify no action in the face of this growing social problem, the Iranian regime says on its official media as if these children do not have families or guardians.

Hossein Maghsoudi, a member of the regime’s parliament would go on to add, “We have about 15,000 scavengers in the capital [Tehran], of which 5,000 are children, 40 percent of whom are the sole breadwinners of their families and are only between 10 and 15 years old” (The state-run Khaneh Melat website (ICANA) – October 18, 2019).

In another report published by the official website of the regime’s parliament, it was stated about the child laborers who have been identified in Khuzestan Province, southwestern Iran, “all of them have families” (The state-run Khaneh Melat website (ICANA) – July 14, 2019).

Child laborers at risk of a variety of diseases

Regarding the conditions of child laborers in Iran, Zahra Sa’ii, a member of the parliament, said: “Most of these children earn money in difficult ways; in hot or cold weather, they carry a sack and collect garbage, known as dirty gold, but they are given only a small share of profit from their findings. This is a new kind of slavery in the age of technology” (The state-run Khaneh Melat website (ICANA) – July 14, 2019).

As a result of their unsanitary environments about “four to five percent of child laborers on the streets have AIDS,” said Minoo Mehrz, director of the AIDS Research Center in Iran. According to the study, 66% of child laborers have parasitic intestinal infections, 10% have urinary tract infections, 96% have dental caries and gum disease, and 24% have skin infections. “In addition, these children have higher rates of depression and suicidal thoughts” (The state-run Khaneh Melat website (ICANA) – July 14, 2019).

There are children from 4 to 12 years old among the scavengers. Living in sheds made of junks without bathrooms or showers, these children have to deal with vermin and contagious diseases. Iron deficiency, lice, skin and ear infections, severe malnutrition, hepatitis A and AIDS are other diseases child laborers have to cope with.

State-run media have written about the girl children sifting through garbage saying they are more vulnerable to diseases than boys. Their long hairs are full of lice and they have not enough water to wash their hair. The little water they use is contaminated. (The state-run ICANA news agency – October 20, 2019)

Elham Fakhari, a member of the Tehran City Council, also said, “Most of these children have a disease, but the issue of their disease is not a priority as they have a slew of other problems such as physical and sexual abuse” (The state-run ILNA news agency – June 12, 2019). The situation of girl child laborers in Iran

Girl child laborers in Iran are in danger of a variety of social ills.

According to a member of the board of directors of the parliamentary Social Committee, “the girls who work on the streets as child laborers are most vulnerable to abuses and social ills.” (The state-run Tasnim news agency – September 27, 2017).

Little girls who have to work on the streets to earn a small income are sexually and physically harassed by municipal agents, thieves and thugs.

April 22, 2020, in the city of Isfahan, several men harassed a girl child laborer and tried to steal her day’s earning but met the girl’s resistance. The bullies finally poured gasoline on the little girl and set her on fire.

On January 28, 2020, a florist girl, who was not more than 7 years old, was attacked and severely injured by a group of stray dogs on the street in Shahr-e Rey, south of Tehran. The girl suffered severe injuries to her head, neck, shoulders, back and legs and was taken to hospital by the public. (The state-run Tasnim news agency – ـJanuary 29, 2020)

Other reports have indicated that municipal agents take sexual advantage of the girls who work on the city streets and at intersections.

In the conclusion, the question is, as tens and hundreds of children join the throngs of child laborers in Iran every day, who is there to aid and account for their situation?