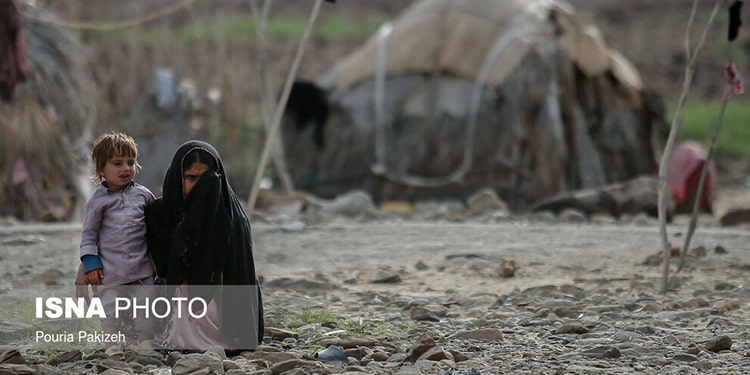 The lack of basic infrastructure for water, medical resources, and roads takes a daily toll on women and girls in southern Iran

Access to urban, medical, and health facilities is among the issues highlighted in Article 25 of the Universal Declaration of Human Rights.

This international document, to which Iran is a signatory, emphasizes infrastructure, social security, and access to social support services for all citizens. The document also states that every human being has the right to dignified living conditions.

SDG 9 of the 17 UN Sustainable Development Goals (SDGs) also focuses on building a flexible and sustainable infrastructure and strengthening innovation. Moreover, SDG 11 is to transform cities and human settlements into inclusive, resilient, and sustainable communities, including through the provision of housing for all, especially low-income groups. The SDG also emphasizes expanding transportation for all, especially women, children, and the disabled, and reducing the effects of natural disasters.

The shocking news of women and children in the disadvantaged provinces of Hormozgan and Sistan and Baluchestan, who are the ultimate victims of a lack of basic infrastructure, testifies to the clerical regime’s non-compliance with international obligations and challenges every human being’s dignity.

Basic infrastructure to include piped water, electricity, accessible medical clinics, and land transport, is among the necessities of human life. However, a sound infrastructure is an unattainable dream for Iranian villagers and even some city-dwellers in the 21st century.

Mohammad Reza Mahboubfar, an expert on social harms, revealed in a speech published by state media in June 2020 that 38 million people in Iran live in shanty towns and slums in the periphery of major cities.[1]

The lack of drinking water, medical facilities, and passable roads victimizes women and children daily in the southern regions of Iran, particularly in the provinces of Hormozgan and Sistan and Baluchestan.

Destruction of roads after devastating floods

After the floods of 2019 devastated most Iranian cities, the roads connecting 120 villages in Hormozgan province became difficult to cross. Moreover, access to 20 villages became impossible because the surrounding bridges were destroyed in the flooding.

Abdul Hashem Hassan-Nia, the head of the Roads and Transportation Organization, revealed in February 2020 that about 1,000 billion tomans of credit was needed to rebuild the destroyed roads, but the regime has failed to allocate a budget to implement the needed repairs.[2]

The commute to some villages in the province was already so difficult that even motorcycles could not access them, and parts of the province could only be reached on foot.[3]

The lack of roads means that villagers must make a 3-4-hour journey on foot to travel a one-hour drive distance. Meanwhile, the nearest medical center that is equipped with vials of special medicinal serums and antidotes is at least 6 to 7 hours away from the accident-prone villages. It should also be noted that the farther the villages are from the city center the fewer facilities they have.

Most of these villages do not have telephone lines. In the event of an emergency, even if someone has a mobile phone, it is impossible to seek help due to the lack of antennas.

She suffered a scorpion sting at 2 a.m. on Sunday, July 5, 2020, but there was no vehicle to transport her to the Emergency Room. At 6 a.m., Maryam’s brother asked a driver to take his sister to the hospital.

The route to the hospital is a 40- 45-kilometer dirt road, only the last 5 kilometers of which are paved.

Maryam’s family took her to the first medical center they could reach and returned her to the village after initial emergency procedures to avoid losing the driver.

After a massive effort that included navigating dangerous terrain from the village to the city, the innocent girl was taken to Minab Hospital. Upon her arrival at the hospital, Maryam’s urine was filled with blood – an indication that her kidneys had failed. Maryam was taken to the Intensive Care Unit, and doctors tried to resuscitate her. Unfortunately, it was too late.

Maryam Sadeghi lost her life precisely 49 days after her 16th birthday. Ali, one of Maryam’s brothers, had died under similar circumstances about 5 years earlier.[4]

Flood victims of Hormozgan are left to combat intense heat, the Coronavirus, and Scorpions

Unfortunately, Maryam’s case is not an isolated incident; there are many more examples like hers.

In Bashagard, a county in Hormozgan Province, residents have had to deal with flooding since January 2020 – more than 8 months. Despite the hardship, they still live in desert camps with no access to electricity or water. Scorpion stings and the spread of the Coronavirus have only added to the suffering.

A mother says, “Our villages are closed with every rain. It is impossible to cross the roads by car. After each rain, it takes 2-3 months for the road to reopen. In the meantime, anyone in the village who is stung by a scorpion or bitten by a snake, or if a mother goes into labor, there is no way to go to a doctor or a hospital. People in need of urgent medical attention may die.”[5]

Area residents have been left without any support. Not a single night passes that 4-5 people are stung by scorpions in their tents. Girls in this community have scars and blisters all over their bodies. Most children suffer from heatstroke.

A grieving father, who lost his young child to the heat last month, says angrily, “Everyone who came just took a souvenir photo with us and left.”

The lack of basic infrastructure even for access to water is catastrophic in Iran’s southern cities.

In July 2020, an unprecedented water shortage forced the 13,000 residents of the cities of Sib and Soran to drink the condensation from air conditioners or seek water from other areas with gallon jugs.[6]

Residents of Sistan and Baluchestan, even in the provincial capital of Zahedan, have very brief access to tap water as the water is cut routinely for the better part of the day. In Sistan and Baluchestan’s population of 2.8 million, more than 50% of residents live in rural areas. Approximately 700,000 residents have no water supply network. Some 1,261 villages are supplied with water by tankers with a per-person daily ration of 15 liters.

Even in the best of cases, the water tankers reach the village once every 3 days and cannot fulfill villagers’ daily rations.[7]

In the absence of drinking water in these areas, women and girls are forced to go to the river or hootag to meet their households’ water needs. Transporting heavy buckets of water over long distances can cause irreparable physical damage, but that is only one of the dangers. In recent months, we have increasingly faced the painful news of children from this province drowning while seeking water.

On August 25, 2020, two children, 3-year-old Fatemeh Pa and 2-year-old Yahya, drowned while going to the river to get a drink of water.

The day before, on August 24, Yasna Padian, a 5-year-old girl from the outskirts of Rask city in southern Sistan and Baluchestan province, drowned in a river.

On August 21, 2020, Zeinab Pour Gholami, an 8-year-old girl from the village of Jakigor in Zahedan, went to the river with her mother to fetch water and wash clothes, but she drowned.[8]

Hootags are large natural or artificial ditches where rainwater is collected. They are considered the village’s water reservoir. Some Hootags are as deep as 15 meters and can contain 2,000 cubic meters of water. The water is used for bathing, laundry, and dishwashing – all at the same time. Livestock and other animals drink from the same water.

Women and girls who go to the Hootags for water face potentially fatal danger, as the Hootags can be extremely deep and have no safety measures or standards. Among the perils of the Hootags are Gando crocodiles.

On August 11, 2020, Amir Hamzeh, 7, was retrieving water from a Hootag when he was attacked by a Gando crocodile. The child lost one of his hands.[9]

State-run television aired a video clip that went viral. In the clip, two little girls describe their stories, which clearly expose the problem.

Interviewer: Isn’t it possible for you to not go to the lake?

Girls together: We don’t have water! What shall we do? We have to.

Interviewer: You mean you use the muddy water for both drinking and washing?

The girls: Yes! What shall we do? We don’t have water. We have to.

Interviewer: Are the Gandos there, every time you go to the lake?

The girls: We can’t see them. For example, when we went and it ate Hava’s hand, we didn’t see it at all.

Bitter accidents repeat over and over

The little girls tell their stories in their simple, childlike language, but they reflect a series of shocking accidents in these areas which are repeated every day due to lack of basic infrastructure.

Some of the examples which found their way to the media follow:

In this dry land, even the rain causes death

The lack of basic infrastructure in cities and villages creates dangers for women and children during periods of drought, and even the rain can cause death.

On August 22, 2020, the Naigon River in Iranshar (in Sistan and Baluchestan) flooded. The flood caused six people from two families to lose their lives.

Some 30 people have lost their lives due to seasonal river floods since late June 2020.[10]

Alireza Senobar, Head of Construction Engineering Organization of Alborz Province, announced in November 2019 that the rate of deterioration of buildings in Iran was well above international standards.[11] The alarming deterioration rate is due to non-compliance with building standards and the continued use of low-quality materials. Arash Rezaii, General Manager of Roads and Urban Development of Hormozgan Province, confessed in August 2020 that the province has 12 run-down neighborhoods in which more than 40 percent of Hormozgan’s population resides.[12]

Abdolmajid Tamandani, Mayor of the city of Khash in Sistan and Baluchestan, also confessed that more than 30 percent of the city’s urban population resides in deteriorated houses. He also noted that in the city, there are more than 700 hectares of dirt roads that must be asphalted.[13]

However, in the reality of practical life, the statistical information is accompanied by the loss of life among the innocent. A 10-year-old girl in Shamil village of Bandar Abbas – Hormozgan Province, became a victim when her aging house collapsed in late August 2020.[14]

The news of this innocent girl’s death was published in a single-line news item by Rokna, a state-run news agency, with no mention of her name.