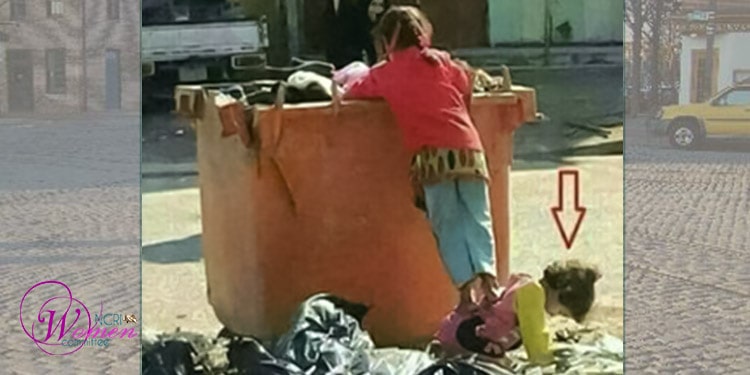 One of the ominous “gifts” of the mullahs’ 40-year rule is the spread of poverty in Iranian society. Among the consequences of the increasing poverty is the bitter tragedy of child laborers, which has had devastating effects on Iranian society.

At the beginning of the school year in Iran, the state media pointed to the bitter tragedy of child laborers. “Every day, we see innocent children at the crossroads to get some banknotes to meet their needs,” they wrote. According to an official from the Welfare Organization, “40% of Iranian children are from destitute families.” (The state-run ILNA news agency – July 7, 2020)

Many of these children cannot study or attend school because they do not even have birth certificates.

Most children who work as garbage collectors are breadwinners of their families. As long as the government fails to support families financially, these children will continue to labor in the never-ending cycle of street work.

Garbage collection exposes children to a multitude of social ills, including addiction and abuse. For example, in 2019, at least 1,200 children under the influence of drugs were handed over to the Welfare Organization. (The state-run ILNA news agency – July 7, 2020)

Garbage girl is forced to get pregnant

The presence of girls among child laborers is another dimension of the bitter tragedy of child laborers. According to regime officials, women and girls have also joined the throng of garbage collectors.

Shahnaz Remaram, a member of the presidium of Mashhad City Council, made remarks that shocked Iranian society. According to her, a garbage girl who is only 14 years old had to get pregnant to pay for her living. She would sell her baby for 20 million – 30 million Tomans. (The state-run IMNA news agency – September 15, 2020)

Shahrvand, a state-run newspaper, recently published a report about buying and selling babies on Instagram for millions. According to the report, baby boys can be sold for about 50 million Tomans; girls command 70 million – 80 million Tomans. Certainly, many of these children will take to the streets again without their families.

An army of child laborers

Officials from the mullahs’ have failed to provide clear statistics about child labor in Iran. However, the vast numbers of children working on the streets, especially in large cities, expose the truth.

Three years ago, a Parliament member estimated that the number of child laborers was 3 million – 7 million. (Nahid Tajeddin, member of the Board of Directors of the Social Commission of the Majlis, the state-run salamatnews.com, September 17, 2017)

However, Habibollah Masoudi Farid, Deputy for Social Affairs of the Welfare Organization, recently announced a different number, stating, “There are 70,000 child laborers… of course, the situation of children working in workshops is different, and no specific statistics on them are available. Many of the workshops that employ child laborers are not legal; they do not have signs and thus are not publicly visible.” (The state-run ISNA news agency – September 10, 2020).

It is crystal clear that, due to economic bankruptcy resulting from the regime’s inefficiency, poverty has spread rapidly across Iranian society, more than ever. Masoudi Farid’s statistics, which do not refer to any specific location, cannot be correct.

Without suggesting any solution about the rising number of child laborers, Ramaram, a member of the Board of Mashhad Municipal Council, confessed, “Increasing poverty has forced citizens to live in suburban slums. The increased number of slum-dwellers produces even more social ills. Child labor in the business of garbage-collection are the result of poverty and living in slums.”

Under Iran’s totalitarian, plundering regime, the cycle of children dropping out of school and joining the army of child laborers continues.