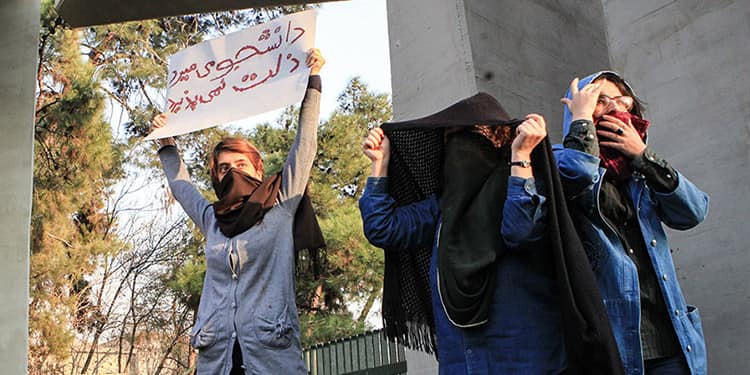 On the anniversary of the 2009 and 2017-2018 uprisings in Iran, it seems appropriate to glance over the Iranian women’s role in anti-regime protests and uprisings as they are the force for change.

Whenever the Iranian regime is tied up in trouble, it escalates attacks on women.

Since seizing power, the clerical regime sought to subjugate the society by enforcing the mandatory Hijab on women and imposing various restrictions on women’s work and social activities.

However, Iran’s aware and freedom-loving women knew that the restrictions had nothing to do with Islam. They looked to brilliant role models among Muslim women of the opposition People’s Mojahedin Organization of Iran (PMOI/MEK), who defied the regime and its misogynous laws.

Despite its heavy price, they have never given in to the sufferings of life during the past four decades under the clerical regime.

On the anniversary of the uprisings on December 27, 2009, and December 28, 2017, we glance over the role of women in the democratic struggle in Iran against the ruling regime. Women are the force for change and an existential threat to the regime.

Women pose an existential threat to the regime

The clerical regime’s Interior Ministry held the first nationwide gathering of general directors of women and family affairs of provincial governorates on December 9, 2021.

The regime’s Interior Minister, Ahmad Vahidi, addressed the gathering. He emphasized that women’s role was more critical than men’s, adding, “If the Revolution (i.e., the clerical regime) were to receive a blow, it would be from women.” (The state-run Entekhab.ir – December 9, 2021)

“Nothing is more important than focusing on the issue of women and families. Because of your position, the governorate should be entirely at your service. You need to show the direction. Your efforts should include a combination of hard and soft work, coercion and choice, as well as obligation and willingness,” Vahidi told the officials in charge of women and family affairs.

To this end, all media and government agencies have mobilized around the Population Growth Plan approved by parliament in November. By emphasizing that women’s childbearing and motherhood are her main job, they want to force families to deliver between three to five children, notwithstanding the infrastructure and environmental deficits on the ground.

The regime has also eliminated subsidies towards contraceptives to support the Population Growth Plan. As a result, the cost of buying birth-control devices also weighs heavy on women and families, most of whom face an economic crisis. Those who cannot afford it confront unwanted pregnancies, which will have long-term irreparable social, human, and environmental consequences.

Why does the Iranian regime feel threatened by women?

Why does the regime’s Interior Minister explicitly feel threatened by women?

A look at the past two months’ protests in Isfahan and Shahrekord, nationwide protests and strikes by teachers, and the active and prominent presence of women in these demonstrations explains it all.

Of course, this is not a spontaneous phenomenon. Women have played a leading and inspiring role in anti-government demonstrations from 2009 to January 2018 and November 2019 throughout the past decade.

In November 2019, the state-run media published images of women in the Resistance Units as leaders of the protests. They wrote women played a leading role in the cells of four or five people. They also encouraged people to join the protests.

The state-run Mashreqnews.com wrote on November 20, 2019, “Women had a remarkable role in the recent mischief. They had a special role in various scenes in inciting the public to carry out acts against the establishment.”

The state-run Fars news agency affiliated with the Revolutionary Guard Corps (IRGC) also wrote on November 20, 2019, “Women’s special role in running and leading the recent riots seemed remarkable. In numerous places, particularly in the Tehran suburbs, women who were apparently between 30 to 35 years old had a special role in leading the riots. These women wore the same garbs; each had a different role; one filmed the riots, the other stopped the cars, and another one incited the people to join the ranks of riots.”

In an interview, the Iranian regime’s Interior Ministry officials told Reuters that of the 1,500 protesters killed during the uprising, 400 of them were women. The hundreds of women falling victim to the regime’s brutal crackdown bespeak their widespread participation in the uprising.

Why are women a force for change?

The unique role played by Iranian women in the uprisings is no coincidence.

Women are the force for change because the sharp edge of the mullahs’ repression has always targeted them in all areas of social and private life. Having borne the brunt of repression for more than 40 years under the mullahs’ rule, Iranian women are a compressed coil that will spring out even further as the spell of repression is removed.

Iranian women have proved their indispensable role in the struggle against religious fascism with utmost dedication and sacrifice in the 1980s. They proved their worth and competence during the dark era of vicious tortures, mass executions, and the 1988 massacre of 30,000 political prisoners.

After earning their rightful place in the leadership of the Iranian Resistance, these women have preserved the movement and led it under the most challenging years and through the most complicated circumstances since 2003.

Today, Iranian women join the PMOI/MEK Resistance Units more and more every day. Because they have found that the only solution to achieve their rights and freedoms is to overthrow and change the mullahs’ misogynistic regime.

They have found their role models among the PMOI/MEK women who never backed down from their ideals since day one despite enduring imprisonment and torture at the expense of their lives. This blood-drenched struggle paved its evolutionary path to women’s leadership in the opposition movement.

Maryam Rajavi’s election as Secretary-General of the PMOI/MEK and the President-elect of the National Council of Resistance of Iran opened the way for competent women to lead the movement. For more than three decades, women have led this movement, motivating and inspiring Iran’s freedom-loving women who seek equality.

Now it is clear why the regime’s Interior Minister acknowledges the danger posed by women. And this is the reason the regime’s entire apparatus has mobilized to keep women at home amid numerous economic and political crises.