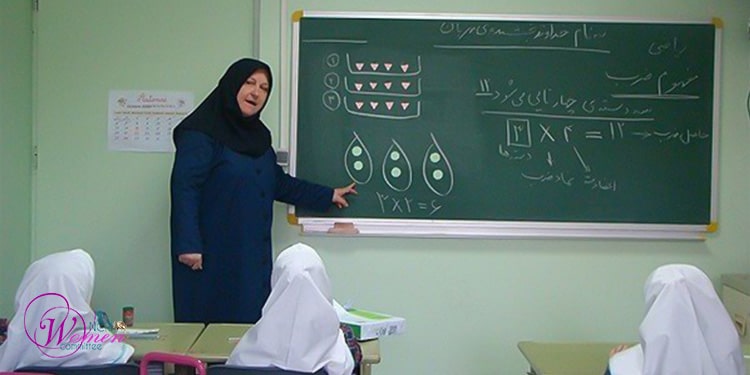 In recent months, we have witnessed widespread protests across Iran by teachers demanding the approval and implementation of the Teachers Ranking Plan. Given that at least 50% of teachers in Iran are female, the demonstrations included many women.

Many of these women are heads of household and have challenges in earning a livelihood. They live below the poverty line.

Following a tense parliamentary session on December 15, 2021, the clerical regime finally approved and announced the Teachers Ranking Plan after 10 years.

According to the bill, teachers will be ranked according to five levels based on “general qualification, profession, expertise, experience, and competitiveness. Salaries will be determined in accordance with the levels.”

The Teachers Ranking Plan is deceptive and useless

The small salary increase that the Iranian regime offers in its Teachers Ranking Plan does nothing to offer economic relief. The move only changes the way government bodies can plunder teachers’ salaries.

Given Ebrahim Raisi’s budget bill for the current Persian year, these teachers still count as taxpayers despite living below the poverty line. The clerical regime thus withdraws part of the teachers’ negligible salaries from their pockets.

Compare this transformed form of theft to the 900-billion-Toman ($33.5 million) increase in the budget of the Revolutionary Guard Corps (IRGC) in the upcoming fiscal year. The IRGC budget shows a 240% increase from the current year.

In a statement dated December 19, 2021, the Teachers Union Council called the plan “incomplete,” writing, “Parliament ignored the protests, and MPs approved an incomplete bill. Last night, the government officially announced that it would not implement even the flawed plan” (Telegram channel of the Coordination Council of Iranian Educators Associations).

Why did it take 10 years to approve the ranking plan?

The Teachers Ranking Plan was proposed 10 years ago. It has been waiting for a parliamentary vote since last March but was never considered a priority.

The only reason for the hasty approval now was the tremor that shook the clerical rule when teachers held a nationwide uprising December 12-14, 2021. The widespread protests took place across 200 cities and districts, with significant participation by women educators and teachers.

In a statement, the teachers rejected parliament’s flawed proposal, announcing, “With no doubt, the flawed ranking plan ratified by MPs was the result of our trade union’s activism and expressions of dissatisfaction. [They saw] all our gatherings and strikes, all the work of provincial administrators, trade union activists, and teachers’ guilds. We will not stop protesting until our demands are met” (Telegram channel of the Coordination Council of Iranian Educators’ Associations).

On December 15, 2021, the state-run newspaper, Etemad, acknowledged that “the accumulation and spread of poverty, discrimination, and social anomalies” have infuriated the people more than ever, and “put pressure” on the regime, and that “protests taking place can be “a threat” to the system.

The state-run Hamedli newspaper also wrote on December 25, “If teachers are not treated properly, it can affect the country’s security, similar to the protests in 2009 and 2019.”

Broken promises by state and parliament

Only three days after announcing parliamentary approval of the Teachers Ranking Plan, Alireza Monadi Sefidan, head of the parliamentary education, research, and technology commission, acknowledged that the Planning and Budget Organization had broken its promise. Sefidan announced, “Despite Mr. Nobakht’s promise to assign 60 trillion Tomans ($2.22 billion) in credit from the current year’s budget to implement the Teachers ranking bill, today we received a letter from the Planning and Budget Organization mentioning a reduction in the budget” (The official website of the parliament, ICANA – December 18, 2021).

Mohammad Habibi, a spokesperson for the Teachers League, explained that the regime had reduced the amount it had initially allocated to this project:  the budget went from 25 trillion Tomans ($926 million) to 12.5 trillion Tomans ($463 million) for a 6-month period. Meanwhile, the government has not disbursed the payments. Instead, it promised to pay the increases in teachers’ salaries retroactively next year. Unfortunately, this means that teachers must wait – maybe years – to receive the 6-month compensation.

Habibi added, “Since the government and parliament failed to keep their promise to implement the Teachers Ranking Plan fully, the Teachers Union Council announces that rallies will continue” (The state-run Arsh website – December 28, 2021).

In a nationwide protest on December 28, 2021, retired teachers rallied in at least 20 cities across Iran. Retired teachers called for the full implementation of the ranking plan. They demanded an increase in pensions commensurate with the rise in the cost of living and real inflation, as well as equal rights for retirees. The protesters also demanded the release of imprisoned teachers.

“If we want to take revenge on you, we will take it from the first day (you seized power) after the [1979] revolution until now,” said a retired woman at the protest rally in front of the regime’s parliament. She directed her words at MPs and parliament speaker Qalibaf when she said, “Now it is your turn to be destroyed.”