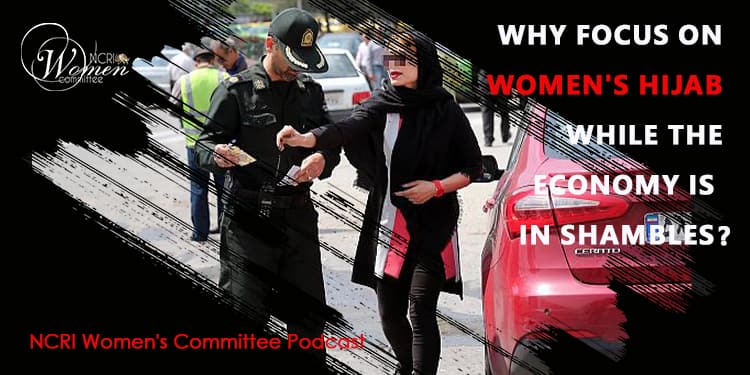 Instead of focusing on the economic situation that is in shambles, the Iranian regime is spending a lot of money to control women’s Hijab.

Enforcing the mandatory veil is used as a tool of repression. The clerical regime finds its male-dominated and medieval interpretation of Islam a systematic way to chain Iranian women and deprive them of their freedoms.

The NCRI Women’s Committee Annual Report 2022 pointed out that Ebrahim Raisi had ordered his governors to lose no time in implementing the Cultural Council’s ratification on Hijab and tightening the rules.

Since last December, they have geared up their measures to harass Iranian women even more under the pretext of enforcing the mandatory Hijab. They have been giving licenses to ordinary people other than the security forces to aid them in this regard. They have built new bases and garrisons to monitor women’s Hijab systematically and advance their goals.

The regime has empowered 120 organizations to enforce the regime’s new laws on women’s Hijab.

One can see the pace picking up after Khamenei selected Ebrahim Raisi, a brutal mass murderer, as president. Facing non-stop nationwide protests, they are stepping up their repression by tightening the rules on women’s Hijab, thereby terrorizing the entire society.

That is in addition to the 27 ministries and government agencies already enforcing the mandatory veil.

They have established a base responsible for imposing the rules on women’s Hijab for female employees in government agencies.

According to its new directive, the base holds the boss accountable if his female employee fails to observe the Hijab law. In the event of repeat offenses, her boss will be suspended.

The regime officials have repeatedly acknowledged their failure. That’s why the State Security Force has been given the go-ahead to use arms and not wait for orders regarding enforcing and protecting this law.

The deputy for women and family affairs has called for taking up arms to deal with improper veiling and women’s defiance.

And finally, as recently as May, one of the State Security Force commanders called on the SSF forces to “fire at will” and not wait for an order.

The Iranian regime is in a very fragile state. Despite all the economic problems in the country, it’s spending its limited budget on creating agencies to monitor women for observing the compulsory Hijab.

Public discontent is at an all-time high. The Iranian Resistance is gaining more ground, and the Resistance Units have expanded their anti-repression campaigns, paving the way for more popular protests.

Iranian women have been opposing the regime since day one. And that’s half of the Iranian population. Women are like compressed springs. They have been the driving force behind many protests and major uprisings in the past years. Even the regime officials confess to acting as “leaders’ in the protests.

So the regime is spending a lot of money to preoccupy women with another problem, namely the Hijab. They want to pretend that the problems with women are limited to the issue of Hijab.

Iranian women have shown in the past 43 years that their conflict with the regime is over fundamental freedoms and rights. That’s why thousands of women have laid down their lives since 1981. They hold key positions in the movement’s leadership and have been at the forefront of all the uprisings in the past ten years.

Women in Iran are systematically discriminated against concerning individual, political, social, economic, and cultural rights. At issue is not and has never been the Hijab.

But the clerical regime sensing its looming overthrow, is now resorting to more desperate measures to contain public discontent and widespread anti-regime protests. It feels at risk from women, so it is mustering all its forces to clamp down on this driving force behind the protests. And it is using women’s Hijab as a pretext.