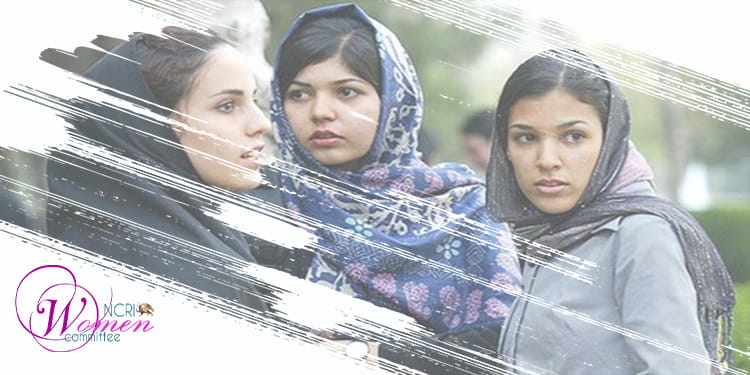 In addition to arrests, torture, and execution, a tool of suppression against the people of Iran is the compulsory Hijab. Since seizing power in Iran and instilling its patriarchal interpretation of Islam, the clerical regime has used the compulsory Hijab to humiliate and intimidate women. The weaker the regime gets, and the more it fears protests and being overthrown, the more it resorts to this dirty tactic.

After nationwide protests in January 2018 and November 2019, and in light of the daily protests, Ali Khamenei, the regime’s Supreme Leader, handed the reins of the country to Ebrahim Raisi. Raisi, a.k.a. “the henchman of 1988,” is known as one of Khamenei’s most brutal and loyal henchmen.

Since Raisi’s appointment as President, the number of executions has increased significantly, and at least 18 women have been hanged. The regime uses executions of non-political prisoners and social repression to intimidate and contain protests.

In the past month, in addition to the brutal suppression, Raisi has increased repressive measures against women, including enforcing the compulsory Hijab.

Thus far, 27 state organizations have been charged with enforcing the compulsory Hijab. Images and footage of police and plainclothes agents brutally attacking women in the streets were posted on social media in the past. However, the regime was not satisfied: it has now created a base, announced new hijab laws, and empowered 120 organizations to enforce them.

In June, Mohammad Saleh Hashemi Golpayegani, the Secretary of the regime’s Enjoining Good and Forbidding Evil Headquarters, spoke at a gathering of enforcers of the compulsory Hijab. He announced that the organization had developed a comprehensive plan to enforce the compulsory Hijab in 11 areas, including executive and cultural sites.

The two bases dubbed the “21-Tir Base” and the “Jihad Tabyeen Base,” have begun their repressive activities.

The 21-Tir Base is responsible for enforcing compulsory Hijab among female government employees. “The secretaries of the provincial headquarters, with the cooperation of management, must implement the first phase of the regime’s plan by July 12 through “tangible and intangible monitoring” (in other words, spying, arresting, and imprisoning).”

Therefore, July 12 (21-Tir in the Persian calendar) is the day of hijab and chastity under the clerical regime.

Inspectors from the Headquarters for Enjoining Good and Forbidding Evil (HEGFE) will visit government institutions and departments and report violations of the compulsory Hijab laws, Seyyed Ali Khan Mohammadi, the HEGFE spokesman, implied in his remarks.

The regime’s large network of spies and undercover agents under the name “People’s Organizations” will also report these cases.

Khan Mohammadi clarified, “[The female] employee is required to wear the hijab according to the law. Her boss will receive a warning if she fails to observe the law. In the event of repeat offenses, her boss will be suspended.”

He added, “The first phase of law enforcement has begun for government agencies, and in later phases, it will be implemented in other segments of society” (The state-run Entekhab.ir – June 3, 2022).

The Jihad Tabyeen Base has been established for three purposes: 1-to explain and educate people about the HEGFE comprehensive hijab plan; 2-to lead and incite demands of chastity and hijab among the religious strata; and 3-to create a platform for public participation in the plan’s implementation, Hashemi Golpayegani said (The state-run Radio and Television network (IRIB) – May 22, 2022).

Khan Mohammadi recently announced, “The Minister of Interior announced the law on chastity and hijab to all institutions, and it should be government agencies’ top priority to enforce this law.”

He further explained that the implementation of the first phase of this project is the responsibility of the 21-Tir Base executive headquarters (The state-run Aftabnews.ir – June 3, 2022).

The regime has briefed its officials and even governors across the country on the criteria for its desired hijab. They accept no excuses for not implementing the law.

However, according to the HEGFE’s latest declaration, the directors and managers in government agencies are now responsible for enforcing compulsory Hijab for all employees under their purview. Such enforcement is subject to evident and undercover surveillance, and if cases of unveiled women are detected, managers and directors will be subjected to punishment, arrest, and other disciplinary measures (The state-run ssn.ir – May 31, 2022)

“Officials must fire at will,” Mohammad Hossein Sepehr, the commander of the operational headquarters of the National Coronavirus Management, told a meeting at the Gilan Province Chastity and Hijab Base.

The meeting came in the wake of the clerical regime’s recent mobilization to impose the compulsory Hijab. Sepehr reiterated, “One of the levers used against the foundations of the Islamic Revolution is (opposition to) the Hijab.”

While acknowledging that the regime had failed in imposing the compulsory Hijab on Iran’s Iran’s brave and intelligent women, he said, “Do not wait for an order.”

“Hospital directors are allowed to deal with and refrain from granting services to unveiled clients because they engage in illegal activity. They are committing a crime,” he added (The state-run Mehr News Agency – May 12, 2022).

Forty years of experience of the mullahs’ rule reveals that “undercover monitoring” and “popular forces” are the pseudonyms of the para-military Bassij forces and the regime’s plainclothes agents.

The order to “fire at will” paves the way for irreparable violence against women.

In 2014, after the parliament passed the “Law for the Protection of Enjoining Good and Forbidding Evil,” we witnessed widespread acid attacks against women under the pretext of hijab. The perpetrators were never arrested or prosecuted.

In addition to formal laws, restrictions on the details of women’s clothing are constantly increasing. On May 27, 2022, Secretary of the Council of Public Culture, Majid Emami, outlined new instructions for women’s clothing, ranging from design to production to distribution and placement in stores.

He also announced that from now on, it would be forbidden to sell or wear coats open in the front and above the knee.

Emami also acknowledged the clerical regime’s failure to enforce the compulsory Hijab. He pointed out, “We have been holding festivals (to impose the compulsory Hijab) for ten years, but the country saw no change in the state of (women’s) clothing” (The official IRNA News Agency – May 27, 2022).

In another development, Mehdi Hajian, the police force spokesman, announced on May 17, 2022, that they had revised the Nazer Plan that had been devised to monitor women’s hijab.

He threatened women that if they removed their hijab inside the car, the police would take their pictures and the picture of their license plates. Even if the car is borrowed, the license plate number will be registered, and the police will go after the owner. “The police will deal with people who take off their hijab, and they will be introduced to the Judiciary” (The state-run hamshahrionline.ir – May 18, 2022).

In March 2022, even the Secretary-General of Iran’s Red Crescent acknowledged the organization’s involvement in the campaign to impose the compulsory Hijab (The state-run Javan Newspaper – April 25, 2022).

Compulsory Hijab, the broadest scope of government violence against women

Scenes of violence against women concerning compulsory Hijab have gone viral on social media for months, even years. One of the most recent examples is an image posted on May 6, 2022, which had a broad social impact and reached the regime’s media.

In the viral video, a plainclothes officer uses brute force and violence to move a young woman into a police car (The state-run Hamdeli Newspaper – May 8, 2022).

The plainclothes officer is so busy insulting and beating the young woman that he has forgotten that Islam forbids him to touch a stranger woman in whose name he wants to impose the hijab. Moreover, the woman’s dress is torn apart during the beating simply because a few strands of her hair were visible.

These barbaric practices, insults, and humiliation against women concerning compulsory Hijab, launched by the misogynistic clerical regime, have been a constant occurrence over the years. Iranian women, however, are well aware that the regime’s primary goal is to perpetuate an atmosphere of terror to curb popular uprisings and prolong their illegitimate rule. This is why we see Iranian women at the forefront of most public protests and uprisings.