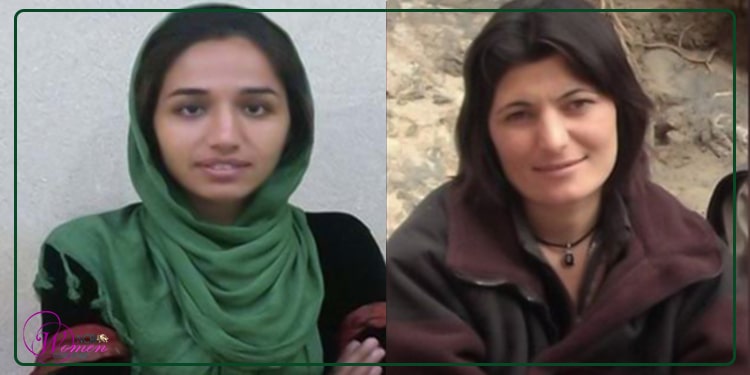 Kurdish political activists continue to experience persecution amid the current climate of activist repression in Iran. In the past month, multiple Kurdish women political prisoners have been prosecuted and detained and have received inhumane sentences in the form of long prison terms.

The brutal persecution of ethnic minorities in Iran, including the Kurds, is among the regime’s 40-year-old tactics to ensure its survival.

This report provides a glimpse into the situation of Kurdish women political prisoners and civil right activists, particularly those who were handed oppressive sentences and pressure in prison in July 2020.

Kurdish political prisoner Zeinab Jalalian, who is serving a life sentence, has experienced multiple illnesses due to pressure and psychological torture. She has been on a hunger strike since June 20 of this year. On April 29, security agents abruptly transferred her from Khoy Prison to Urmia and Kermanshah for 2 days. Her hands and feet were cuffed before being sent to the Evin Prosecutor’s Office, and finally to Qarchak Prison. After being transferred to Qarchak Prison, Zeinab contracted the Coronavirus. She was then transferred from the quarantine ward of Qarchak Prison to an unknown location on June 25, 2020. It was later revealed that she had been transferred to solitary confinement in Kerman Prison.

Zahra Mohammadi, another Kurdish political prisoner, was sentenced to 10 years in prison for teaching the Kurdish language.

The verdict, issued by the Sanandaj Revolutionary Court, was announced to Ms. Mohammadi’s husband in a text message on July 12, 2020.

Ms. Mohammadi can appeal the ruling within 20 days. During her detention, interrogators repeatedly forced her to cooperate with agents from the Ministry of Intelligence, who coerced her into signing pre-arranged confessions. The agents threatened to arrest her family members if she did not cooperate.

On July 21, 2020, social media activists conducted a Tweet storm to protest her 10-year prison sentence. Zahra Mohammadi’s students published a tract that read, “if teaching and learning Kurdish is a crime, we are all proudly guilty. Zahra Mohammadi is not alone; all of Kurdistan is Zahra Mohammadi.”

Another Kurdish political prisoner, Sakineh Parvaneh, has been on a hunger strike since June 18, 2020, to protest the harassment to which she has been subjected during her detention, and the pressure on her family. This political prisoner ended her hunger strike in the first week of July 2020, after being transferred from Qarchak Prison in Varamin to Evin Prison.

Sakineh Parvaneh was arrested by the Ministry of Intelligence on February 7, 2020 and transferred to Ward 209 of Evin Prison. She was held in solitary confinement for 10 days. She was transferred to the women’s ward of Evin Prison in the last week of February 2020. Sakineh Parvaneh was transferred to Qarchak Prison as punishment for writing slogans in Evin. During the transfer, security personnel beat her. Parvaneh, hands and feet cuffed, was held in solitary confinement for 4 days before being transferred to Aminabad Psychiatric Hospital in Tehran. After 25 days, she was returned to the quarantine ward of Qarchak Prison.  security.” She was denied the right to a lawyer during her detention and interrogation. Sakineh Parvaneh was born in 1988 and is a Kurd from Kermanj, Khorasan Razavi Province.

Faranak Jamshidi, a member of the Kurdistan Green Society and an environmental activist, was arrested on June 28, 2020 by agents affiliated with the Sanandaj Ministry of Intelligence. The activist’s interrogation process is ongoing. She spent several days in the detention center at the Sanandaj Intelligence Office; at night, security forces return her to the Correctional Center (Women’s Prison) in Sanandaj. The environmental activist was charged with “propaganda against the state” and “acting against national security.”

According to Kurdish human rights networks, at least 46 Kurdish citizens were arrested by security forces in different cities of Kurdistan in July on charges of political, ideological, labor-related, and civil activities.

In addition, 19 Kurdish citizens were sentenced by the judiciary to a total of 71.5 years and 74 lashes for their political and civic activities. A religious activist has also been sentenced to death.

Prior to this, Parisa Seifi, a Kurdish artist, was arrested on November 12, 2019, and sentenced to 3 years in prison.

Mojgan Kavousi, a Kurdish writer and researcher, was arrested in Marivan and Javanroud on charges of publishing images of the martyrs of the November 2019 uprising. She was initially sentenced to 5 years in prison, but authorities increased it 6 years and 3 months in an appeals court.