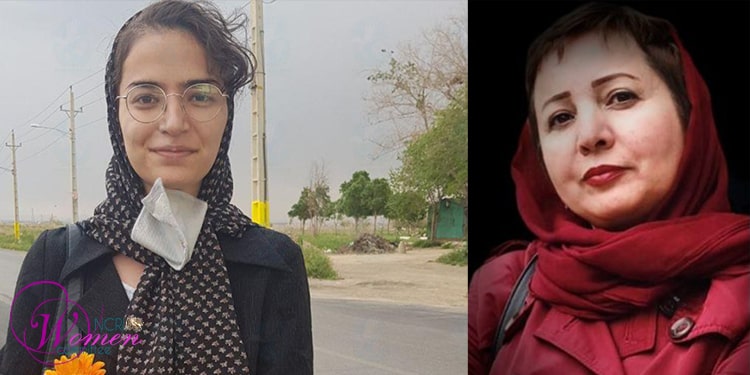 The Coronavirus has plagued all Iranian prisons. The clerical regime, however, continues to transfer female activists to jail. It refuses to grant leave to political prisoners. In the few cases where it has granted leaves, the regime refrains from extending them and has summoned the prisoners back.

Motallebzadeh is a photographer by profession and a women’s rights activist who chairs the Association to Defend Freedom of the Press.

Ashraf Nafariyeh is a student activist.

Ms. Motalllebzadeh was first summoned by the Ministry of Intelligence on November 26, 2016. The authorities temporarily released her on a bail of 300 million Tomans, on December 19.

Tehran’s Revision Court eventually sentenced Aliyeh Motallebzadeh in 2017 to three years in prison. The court charged her with “association and collusion against the country’s security” and “propaganda against the state.”

Motallebazadeh had particpated in two major campaigns in support of women’s rights and the victims of acid attacks.

On April 27, 2019, security forces arrested her at home in Shahriar for her activities in social media. Several days later, they released her temporarily on a bail of 500 million Tomans. The Revolutionary Court finally sentenced her to four months in jail on the charge of “propaganda against the state.”

In another development, the mullahs’ Judiciary extended the order for detention of environmental activist Faranak Jamshidi.

Ms. Jamshidi has been detained since June 28, 2020 without standing trial. She has had no visits with her family.