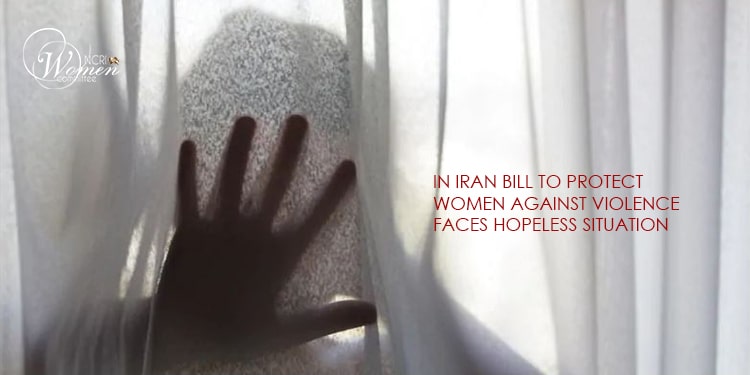 The bill to protect women against violence faces a hopeless situation under the mullahs’ misogynistic regime in Iran.

The Protection of Dignity and Support for Women Against Violence bill was adopted by the government on January 3, 2021, the state media in Iran reported. The government took another 11 days to present the bill to the parliament on January 14 for final examination. The parliament, however, has yet to announce the receipt of the bill.

Earlier on December 16, 2020, Mohsen Dehnavi, member of the board of directors of the mullahs’ parliament, had acknowledged in an open session of the parliament receipt of a plan called “Protection, Dignity, and Provision of Security for Ladies against Violence.” (The state-run IRNA news agency – December 16, 2020)

The 39-page plan had been registered by members of parliament and since the time it was received, 51 members including only 4 women have been examining it.

Nasrollah Pejmanfar, head of the Principle 90 Committee in the parliament, said: “The government had announced several times that it would present the bill on provision of security for women to the parliament, but it did not. So, we tabled it in the form of a plan.” (The state-run Fararu news agency – December 20, 2020)

As a result of this situation the parliament has both a bill and a plan on its table regarding violence against women.

Is the bill really going to protect women against violence?

After 9 years of anticipation, the competition between the government and the parliament has turned into another obstacle in the way of adoption of a bill to protect women against violence.

The bill, however, has many deficiencies which make it inefficient in achieving its goals.

For example, it is stated in this bill that the Judiciary and State Security Force agencies are obliged to immediately act and open a case for women victims of violence who complain to them. But if the woman was complaining from her husband or father, then “the case must initially be referred to the Council for Resolving Differences to achieve peace and reconciliation” and “if reconciliation was not achieved, then it must be referred to a court to processed through legal stages within one month.”

Clearly, such lengthy processes disappoint women from receiving any support or protection against violence.

The bill’s efficacy had been earlier questioned by Parvaneh Salahshouri, a former member of the mullahs’ parliament. “Even if the bill is adopted, the conditions would only get worse for women. The present bill has removed the phrase ‘violence against women’, factoring out or somehow changing the parts on security of women. As a result, the bill has lost its goal… The bill has only played with words.” (The state-run khabaronline.ir – December 16, 2019)

Gradual shrinking of the bill to protect women against violence

The bill entitled “Provision of Security for Women against Violence” was proposed to the clerical regime’s parliament in 2011. It contained five chapters and 81 articles.

By 2013, its articles had been increased 92. Eight years later, after making numerous changes to the bill including changing its name, the Judiciary passed the bill to Rouhani’s government on September 17 2019. The bill renamed as “Protection, Dignity and Provision of Security for Ladies Against Violence” contained five chapters and 77 articles.

Still, it took 16 months for the government to ratify the bill.

Shahindokht Molaverdi, Rouhani’s former deputy for Women and Family Affairs, said in this regard: “It seemed that the government was in no rush to examine the bill. This is proved by Mrs. (Massoumeh) Ebtekar’s tweet after Romina Ashrafi was murdered by her father, indicating that the bill was not on the government’s agenda and it had been forced to examine the bill only after this bitter incident. It seems that in the absence of such incident victimizing a young girl, the government would not have worried about ratifying the bill in the final months of its administration.” (The state-run Sharq daily – January 18, 2021)

Finally, the government renamed bill as “Protection of Dignity and Support for Women Against Violence” and presented it to the parliament in five chapters and 58 articles.

According to Molaverdi, considering the various other concerns and priorities of the parliament, it is a far-fetched expectation that the parliament would examine the bill by the end of Rouhani’s term (in July), pass it to the Guardians’ Council and return it to the government. (The state-run Sharq daily – January 18, 2021)

At least a decade of foot-dragging in the adoption of any bill to protect women against violence has placed Iran on the top of the list of countries with highest records of domestic violence against women. (The state-run Jahan-e San’at daily – November 19, 2020)

Experts in Iran say at least 66 percent of Iranian women experience domestic violence in their life time (ISNA – November 16, 2018) and that “there are no safe homes in Iran, today.” (The state-run Jahan-e San’at daily – November 19, 2020)

The pandemic has aggravated the situation. Mohammad Reza Mahboubfar, a social ills expert under the clerical regime, has revealed that the statistics on domestic violence in Iran surpassed the total of the previous years in just the first three months of the Iranian year (April – June 2020). He said it was expected that the average annual rate of 450 honor killings in the country would rise to 2,736 this year. (The state-run Jahan-e San’at daily – November 19, 2020)

In explaining the reason for this upward trend of violence against women in Iran, the regime’s experts acknowledge that men are encouraged by the law.

The clerical regime’s laws sanction men’s physical, verbal and psychological abuse of women, and murder of women and girls in the family. Enjoying legal impunity against maximum punishment, men are encouraged to repeat their crimes.

“Unfortunately, we are stuck in the denial stage with regards to violence against women,” Molaverdi told Sharq. “The legislators and the government need to exit this stage. Our studies have revealed the truth that the prevalence, wide breadth and diversity of this phenomenon (violence against women) bespeak of insufficient and disproportionate reactions by the legislative, judicial and executive regimes.”

Clearly, women’s security, their dignity and equality, just as freedom and social justice, will never be realized in Iran under the mullahs’ misogynous regime. Firstly, because violence against women is sponsored by the government, and secondly because it is institutionalized in the law.

So, the conscious and aware women of Iran do not heed or tie any hope to the clerical regime’s hollow maneuvers. Instead, they spearhead the protests to overthrow this misogynistic regime and courageously pay the price for doing so.