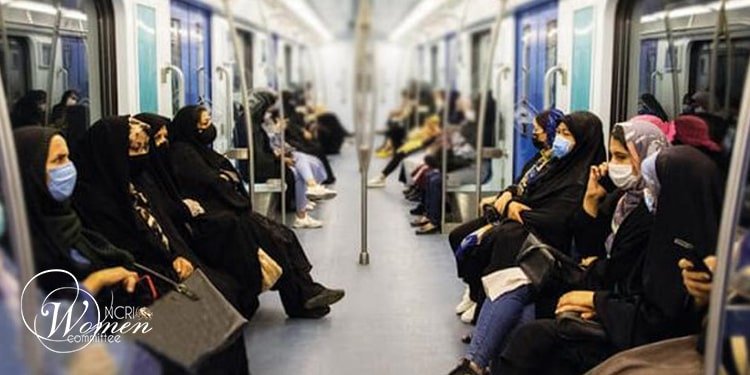 The Prosecutor’s Office of Mashhad sent a letter to the city’s governor, urging them to prevent the entry of improperly veiled women to metro stations.

Explaining the content of the letter, Hashem Daemi, a member of the City Council of Mashhad, said: “In light of the growing trend of violation of norms in the metro stations, the municipality and its officers are duty-bound to act as soon as they see examples of improper veiling or women appearing in public without a veil. Such action would be an example of enjoining good and forbidding evil.” (The state-run Hamshahrionline.ir – July 5, 2022)

In this letter, the Prosecutor has also required the municipality to post notices at all entrances, stating that because improper veiling is a crime, they will not accept or offer services to individuals who do not observe the religious Hijab!

The Prosecutor also gives an open hand to agents in the metro stations in Mashhad to personally intervene and give verbal warnings to women. And if the woman in question did not comply, they should document the case and introduce the woman to the police.

Hashem Daemi reiterated that metro agents are not law enforcement officers and are not licensed to prevent the entry of improperly veiled women to the metro stations.

Daemi was asked whether the municipality is considering allocating specific public spaces for imposing such restrictions on women. He answered, “The Judiciary’s stress is on the metro stations, but there are other places where there might be worse examples of improper veiling. The restrictions might be stricter in other complexes, like the airports.” (The state-run rooziato.com – July 5, 2022)

As for the stepped-up suppression of women, he said, “If we want to issue a verdict or make a decision based on justice, it should be for all places.”

After the “21 Tir Garrison” started its work in Khorassan Razavi Province, there was news that intangible guidance patrols had been launched in Mashhad.

On July 4, the Prosecutor’s Office of Mashhad wrote a letter to the Governor of Mashhad urging him to prevent providing services to improperly veiled women in banks and offices. The news was announced by the Deputy Prosecutor of Mashhad, Esmail Rahmani.

The ill-fated project of guidance patrols

For years, the mullahs’ misogynous regime has stationed guidance patrols in every street and city square to counter what it calls improper veiling. In this way, it attempts to suppress women under the pretext of how they dress. The violent treatment of Iranian women and girls by these patrols has repeatedly made headlines.

Nevertheless, after so many years, the state-run Resalat daily newspaper acknowledged the regime’s failure in launching the guidance patrols.

The paper wrote, “Not only guidance patrols have not protected the Hijab but have sown seeds of hatred and spite among some sectors of society.” (The state-run resalat-news.com – June 14, 2022)