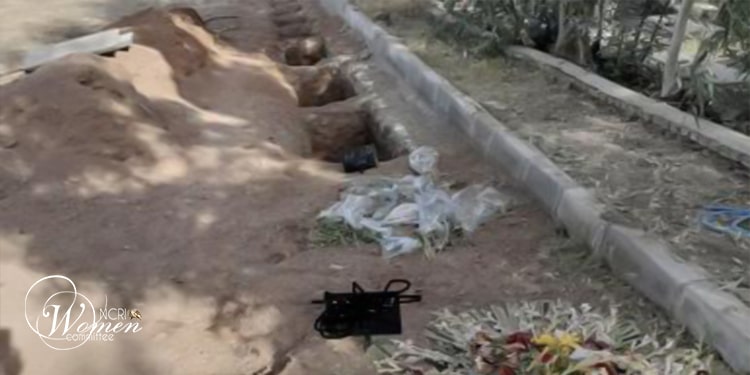 New graves dug on the top of the mass graves of victims of the 1988 massacre.

Mothers seeking justice protest against the destruction of Khavaran

Mothers seeking justice for their children issued a statement on Tuesday, April 27, 2021, protesting the demolition of Khavaran, the site of the mass graves of the victims of the 1988 massacre.

In summer 1988, the clerical regime embarked on the massacre of 30,000 political prisoners who were serving their sentences for opposing the clerical regime. Thus, the regime is endeavoring to remove the evidence of its crime against humanity.

Mrs. Sholeh Pakravan published the mothers’ statement on her Twitter account, in which they said: “Khavaran symbolizes the sacrifice of thousands of young women and men, who like our children, were either sent before firing squads or were hanged from the gallows. We stand by ‘Khavaran’ mothers and families.”

The text of their statement follows:

We are the women who have witnessed the burial of our children, who were killed and drenched in blood.

We saw our sons and daughters when bullets shattered their brains or pierced their hearts, or the State Security Force ran over their bodies with their vehicles or smashed them with electric shocks. We have seen the bodies of our children mutilated under torture. We have seen and kissed their bruised necks.

We have deeply felt the suffering of departure and the absence of our loved ones. Our children believed in the freedom and liberation of people. They believed in a bright future for Iran. They taught us to struggle for freedom and human dignity, even if it costs our own lives.

We, women, have found the continuity of our lives in seeking justice for our children. We know that many women lived before us whose children’s blood-drenched bodies were buried secretly in individual or mass graves. They were not even allowed to mourn their children or hold a memorial ceremony for them.

Many of these mothers died with great grief in their hearts. Despite their tremendous suffering, they never gave up on seeking justice. The new generation of mothers seeking justice has now inherited the flag they held aloft.

We have heard that Khavaran, the burial place for these mothers’ children, has recently been trespassed, and the regime wants to turn that place into a cemetery for the burial of the deceased.

The signatories to this statement express our protest this inhuman act. We declare that Khavaran must be preserved intact as a symbol of the struggle of the people of Iran against oblivion.

Khavaran is a reminder of the sacrifice of thousands of young women and men. Like our children, they were either sent before the firing squads or were hanged from the gallows. We stand by Khavaran mothers and families.

Jila Ahmadi, the sister of Bahram and Shahram Ahmadi, executed in 2011 and 2016

Narges Afshari, the mother of Mohammad Dastankhah, killed during the November 2019 protests

Shahnaz Akmali, the mother of Mostafa Karim Beigi, killed during the protest on December 27, 2009

Iran Allahyari, the mother of Mehrdad Mo’einfar, killed during the November 2019 protests

Farzaneh Ansarifar, the sister of Farzad Ansarifar, killed during the November 2019 protests

Zeinab Bayazidi, relative of Rahman and Hassan Bayazidi, executed in the 1980s

Nahid Baharlou, the sister of Massoud Baharlou, killed during the November 2019 protests

Sholeh Pakravan, the mother of Reyhaneh Jabbari, executed in October 2014

Shamsi Khamseh, the mother of Babak Assadi, wounded during the protests in 2009

Mahboubeh Ramezani, the mother of Pejman Qolipour, killed during the November 2019 protests

Nahid Shirpisheh, the mother of Pouya Bakhtiari, killed during the November 2019 protests

Gohar Eshghi, the mother of Sattar Beheshti, killed under torture in 2012

Ghadamkheir Faramarzi, the mother of Bahram and Shahram Ahmadi, executed in 2011 and 2016

Shahnaz Morattab, the aunt of Arvin Morattab, killed in the downing of the Ukrainian Airliner in January 2020

Marian Mo’einfar, the sister of Mehrdad Mo’einfar, killed during the November 2019 protests

Shahin Mahinfar, the mother of Amir Arshad Tajmir, killed during the protest on December 27, 2009

Behiyeh Namjou, the mother of wrestling champion Navid Afkari, executed in summer 2020, and of political prisoners Habib and Vahid Afkari

Maryam Hashemi, the aunt of Sajjad Rezaii, killed during the November 2019 protests

Tahereh Bejervani, the wife of Seyed Ali Fotouhi, killed during the November 2019 protests

Zeinab Mohammadi, the mother of Mohammad Taheri, killed during the November 2019 protests