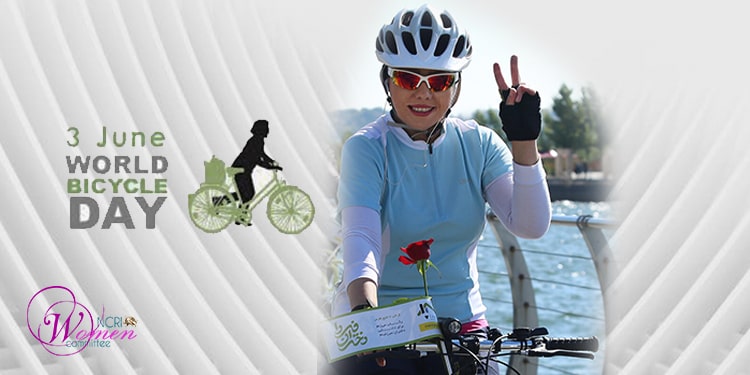 The ban on women’s cycling: Unwritten law ordered by the misogynist mullahs

The ban on women’s cycling: Unwritten law ordered by the misogynist mullahs.

Since 2018, June 3rd has been designated world cycling day. Cycling is a resource for social, economic, and environmental benefits that brings people together. Women in Iran are deprived of this healthy and social possibility. In the regime’s judicial laws, there is no law prohibiting women from cycling. However, marjas or religious scholars in the velayat-e faqih regime have enforced this ban every year and routinely prevent women from using bicycles in urban public spaces.

History of incidents in Khorasan province

Numerous instances of these bans have taken place in previous years. The last example is from 2021. The Prosecutor of Torqaba and Shandiz announced, “In accordance with the decree of the Headquarters of Promote Virtue and Prohibit Vice, and according to the fatwa of some marjas who forbid women’s bicycling in public, women cyclists have been banned in the city (The official IRNA News Agency – 31 May 2021).

Earlier in July 2020, the Prosecutor of Torqaba and Shandiz in Khorasan Razavi banned women from cycling.

The head of the Cycling Board of Khorasan Razavi announced the ban on women’s cycling in public spaces in the province, indicating that the Headquarters of Promote Virtue and Prohibit Vice was responsible for this decision (The state-run Asr-e Iran website – August 4, 2020).

Another example is from Mashhad, where women’s cycling in public spaces was banned by the Headquarters of Promote Virtue and Prohibit Vice. They also established a bicycle ban board in parks and other public spaces in Sabzevar.

Khorasan and Isfahan have been the focus of opposition to this women’s sport (The state-run Asr-e Iran website – August 4, 2020).

Another example is women’s cycling in Isfahan. In May 2019, according to a ruling issued by the Isfahan Prosecutor’s Office, SSF agents were required to detain female cyclists and obtain their identification documents. The SSF were further ordered to seize the bicycles of any women cyclists without identification. According to the Isfahan Prosecutor’s Office, this ban was in response to objections of the representatives of the Supreme Leader, Ali Khamenei, to women’s cycling in public spaces (The state-run Asr-e Iran website – May 14, 2019).

A year later, Yousef Tabatabainejad, the Imam of the Friday prayer in Isfahan, addressed the issue in the first Friday prayer after Coronavirus restrictions were lifted. He urged the media not to promote women’s cycling, adding, “This is a form of atheism, and scholars say it is not permissible” (The state-run Entekhab website –July 10, 2020).

In 2019, the Isfahan Public Spaces Authority shut down two bicycle delivery stations in Darvazeh Dolat and Enghelab because they had been renting bicycles to women. (The state-run Fars news agency – June 27, 2020) In 2019, social media reported the closure of Isfahan municipality’s cycling station located on the Marnan Bridge.

Khamenei’s representatives have focused on cycling in Iran’s tourist cities, particularly Isfahan and Khorasan provinces. Alam ol-Hoda, one of Khamenei’s most misogynistic Friday prayer imams, has repeatedly threatened women cyclists. He announced that “Girls cycling in front of boys’ eyes at university will turn the university into a hotbed of corruption!” (The state-run Entekhab website –June 19, 2020).

Mohsen Mahmoudi, another representative of the Supreme Leader and the Friday prayer imam of Varamin, expanded out the mullahs’ misogynistic thoughts, asking, “What is the moral value of a female cyclist wearing inappropriate clothing?” (The state-run Entekhab website –June 19, 2020).

During the years of the mullahs’ misogynistic dictatorship, women’s sports have always been subject to numerous limitations and obstacles.

By politicizing women’s sports and turning it into a national security issue, the mullahs continue to deprive women of these healthy social possibilities. The mullahs’ misogyny has gone so far as to make riding pillion on a motorcycle illegal for women (The state-run Asr-e Iran website – June 14, 2020).

Among the problems in Iran, in addition to the compulsory hijab, is the issue of sports. The government’s misogyny in this area has prevented Iranian women from reaching high degrees of success.

An example is Atousa Abbasi, an Iranian cyclist. She was the first individual women’s medalist in Asian competitions and has been holding the record for speed in Iran since 2014. She was forced to turn to peddling due to her financial distress and inability to meet her living expenses.