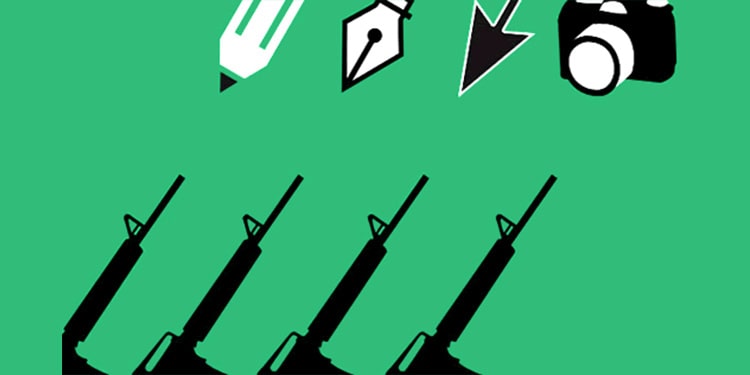 Persecution of journalists in Iran aims to stifle calls for freedom

Just like in every other realm in Iran, female journalists are doubly oppressed

Freedom of the press and journalists is experiencing its darkest days in Iran. Persecution of journalists in Iran is one of the regime’s attempts to stifle any call for freedom in the country.

November 2 marks the International Day to End Impunity for Crimes against Journalists. The following report is a brief review of the situation of female journalists and reporters in Iran.

Holding the record for execution of journalists in 50 years

Those journalists who attempt to publish the truth face harsh punishments in Iran.

At least 20 journalists, citizen-journalists and bloggers have been sentenced to death in Iran in the past 20 years and, according to official figures, the clerical regime in Iran has executed more journalists than any other country in the past 50 years. (Website of the Reporters without Borders (RSF), October 9, 2020)

“Iran has executed thousands of men and women since 1979, including a score of journalists who were all convicted by unfair courts,” RSF secretary-general Christophe Deloire said. “Sentencing prisoners of conscience including journalists to death is the most extreme way to suppress freedom of expression. It is time the Islamic Republic finally abandoned these cruel punishments from another era.”

In Iran, journalists are arrested under various pretexts. They include propaganda against the state, acting against national security, dissemination of lies, insulting, collaboration with enemy governments and even espionage.

Article 24 of the Iranian regime’s Constitution nevertheless indicates “Publications and the press are free to discuss issues unless such is deemed harmful to the principles of Islam or the rights of the public. The law shall determine the details of this exception.”

This article, however, has been repeatedly violated. Many journalists have been arrested for exercising their right under this article. Some have suffered various deprivations including their activities in the media and being banned from leaving the country.

Punished by death and imprisonment for publishing the truth

Every year, many journalists are harassed, detained and imprisoned for doing their job. Following are just a few examples of persecution of journalists in Iran, particularly female reporters whose fate found its way to the press.

The actual names and numbers are much higher.

Zahra Kazemi, an Iranian Canadian journalist, was arrested on June 23, 2003, outside the Evin Prison in Tehran while she was taking pictures from a gathering of the families of Evin prisoners.

Initial reports and testimonies indicated that her death had been caused by harsh beating while in custody and more specifically by blows to her head.

The Iranian authorities, however, concealed the truth and misled judicial investigations to hush up the controversy surrounding the death in custody of a dual national in an Iranian jail.

On July 16, 2003, it was announced that Zahra Kazemi had died of a brain stroke. Later revelations however revealed that Tehran’s Prosecutor, Saeed Mortazavi, had actually killed Zahra Kazemi during his interrogations.

Nada Sabouri was a journalist and reporter who had participated in a protest in March 2014 against guards’ attack on detainees in Ward 350 of Evin Prison. She was sentenced to 3 years and 6 months’ imprisonment on the charge of association and collusion against the regime.

Agents of the Intelligence Ministry arrested Tahereh Riyahi, a journalist and social editor for BORNA news agency, in 2016. She was accused of propaganda against the state. In her last call from Evin Prison, she told her family not to wait for her any longer.

Zeinab Rahimi, a journalist who reported on environmental issues for ISNA news agency, was dismissed in April 2020. They accused her of communicating with the enemy (The state-run Ensafnews.ir, April 21, 2020).

Kowsar Karimi was the first to report on the demolition of the houses of residents of Abolfazl village in Khuzestan Province. She was arrested in September 2020, and arraigned with the charge of propaganda against the state.

Aliyeh Motallebzadeh, head of the Association Defending Freedom of the Press, was transferred to Evin Prison in October 2020. This photographer and women’s rights activist has to serve three years in prison.

Negar Massoudi, a photographer and documentary filmmaker, was arrested in October 2020 by agents of the Intelligence Ministry in Tehran. She was active reporting on the acid attacks against women in Isfahan.

In September 2018, the ANA news agency in Tehran dismissed 50 female journalists just because of their gender.

One of the dismissed reporters tweeted at the time: “The absence of a syndicate defending reporters and journalists has led to the mass expulsion of the best media experts, without any firm reaction or criticism.”

Cracking down on freedom of the press in Iran is not a new phenomenon. The mullahs’ oppressive regime is expanding its suppressive measures as it is engulfed in irremediable crises.

The Iranian regime’s dark record on freedom of the press and treatment of journalists in Iran must be censured by international organizations. The regime must be held to account for its persecution of journalists and reporters in Iran.