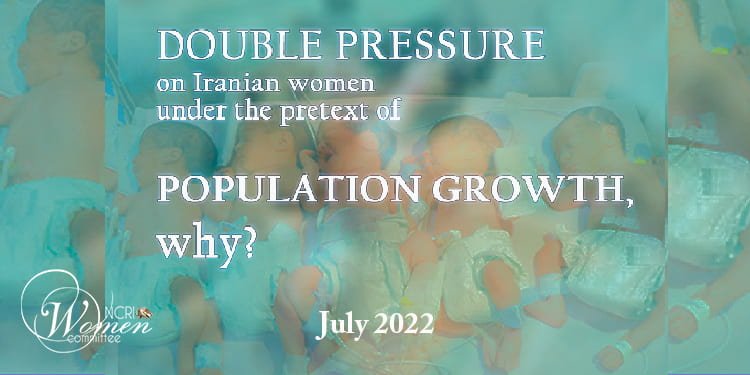 When the lack of employment and inflation has taken away even bread from the Iranian people’s food basket, Ali Khamenei, the clerical regime’s Supreme Leader, has called yet again for population growth.

Khamenei emphasized in a message to the National Staff of Population, headed by Ebrahim Raisi, the need to stifle policies on women’s rights to increase the population rate. Khamenei thanked the lobbies in Parliament and across government working towards this goal. He declared the “generation growth and rejuvenating the human force” as “a vital policy and a crucial task.” The mullahs’ supreme leader went on to call the social harms caused by a population boost “bogus.” (Khamenei’s Official website of farsi.khamenei.ir – May 18, 2022)

Following the logic of the Absolute Rule of the Jurisprudence, the clerical regime officials allow themselves to intervene in the most private family affairs. They easily implement measures to preserve their illegitimate rule, regardless of the cost to people’s lives.

The plan to grow Iran’s population and increase the number of youth is an example of such policies. A law with a similar name attempts to institutionalize the suppression of Iranian women under a good guise.

In 2015 and the years before the clerical regime turned this policy into the country’s formal law, Amnesty International wrote, “The proposed laws will entrench discriminatory practices and set the rights of women and girls in Iran back by decades. The authorities are promoting a dangerous culture in which women are stripped of key rights and viewed as baby-making machines rather than human beings with fundamental rights to make choices about their own bodies and lives.”

In his latest report on human rights violations in Iran, the UN Secretary-General Antonio Guterres expressed concern about the potential impacts of Iran’s policies to increase population growth, such as the Youthful Population and Protection of the Family law.

Earlier, when Ebrahim Raisi announced the enforcement of the “Population Growth and Family Support” law, UN human rights experts called for the revocation of this law. They issued a statement in which they called the law “a direct breach of women’s rights according to international laws.”

UN human rights experts reiterated, “The consequences of this law will be crippling for women and girls’ right to health and represents an alarming and regressive U-turn” for the regime.

The Human Rights Watch and other organizations said the adoption of this law undermined Iranian women’s rights, dignity, and health and called for its annulment.

Women’s rights activists also noted the impact of this law amounting to the reduction of women’s employment, an increase in child marriages, and premature births. (Iran International, June 21, 2022)

One of the regime’s primary goals in implementing the Population Growth Plan is to get people preoccupied with livelihood issues. The regime deflects with this new plan to prevent mass protests and delay its overthrow as much as possible.

·        The policy of abandoning the Iranian people during the Coronavirus pandemic, leaving them without healthcare – a measure that led to a still-growing death toll of 530,000. Khamenei personally banned the vaccine from entering the country.

·        The killing of 176 innocent passengers on the Ukrainian passenger plane when it was downed by the Islamic Revolutionary Guard Corps’ missiles in 2020.

These obvious crimes should be added to the massive losses imposed on the Iranian people because of the regime’s enormous corruption: people are killed during natural disasters such as floods, earthquakes, and air pollution caused by environmental degradation; and a number of people died in road accidents, several times the global average; the collapse of poorly constructed and unstable buildings, and so on.

On the other hand, due to recent price hikes and the elimination of food subsidies, Iranian families spend 86 percent of their income on food. Half of the Iranian households have nothing left to spend on education and health care (The state-run Rouydad24.ir – May 28, 2022).

This brings the Iranian people to the streets, finding their only answer in protesting and demanding the overthrow of the entire religious dictatorship. The best way to defend Iranian women (and women’s rights), who, according to state-run media, are at the forefront of popular uprisings, is to support the people’s protests and boycott the mullahs’ regime.