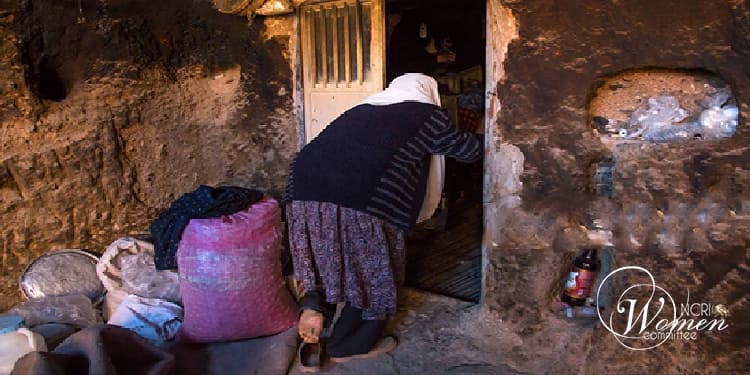 Poverty and violence against women: the leading causes of homelessness among Iranian women

The leading cause of homelessness among Iranian women is poverty and systematic violence against women under the misogynist mullahs’ regime.

Poverty, in general, means a precarious livelihood. Hunger, malnutrition, limited access to education, lack of access to health services, and the lack of participation in decision-making are all consequences of poverty.

Poverty, the leading cause of homelessness among Iranian women

The first report provided by the Labor Ministry, published in August 2021, mentioned that the number of people below the poverty line in Iran had reached 36 million by 2020. However, Shahab Naderi, a Member of Parliament, revealed in 2017 that 80% of Iran’s society lives below the poverty line (The state-run icana.ir – March 13, 2018).

Given its inhumanity and misogynist policies, the root cause of the increasing poverty and homelessness among Iranian women is the dictatorial regime. Thus, in Iran, we face the phenomenon of the feminization of poverty.

Feminization of poverty in Iran and its tragic outcomes

Feminization of poverty describes the most unfortunate and hazardous conditions for women. Due to this horrific phenomenon, Iranian society faces various social, economic, cultural, and health crises.

Pooneh Pilram, a psychologist and adviser to the former governor of Ahvaz on women’s affairs, says poverty-related issues are more significant among women, e.g., addiction, prostitution, homelessness, and unemployment. Because of these conditions, we say that poverty has become feminine.

In other words, poverty has taken on a feminine appearance. In Iran today, under the rule of the mullahs, the feminization of poverty increases daily. Women are easy targets, and because they are homeless, they are more likely to wander the streets, prostitute themselves, become addicted to drugs, or commit suicide.

The statistics indicate that, with the growing number of divorced, self-supporting women, many homemakers are trapped in an endless cycle of poverty and no income. The risk of poverty lurks in women without economic activity, and this is a shocking number in Iran.

It should also be noted that the number increased after the Covid-19 pandemic due to growing inequality in society and limited access to essential resources.

Most homeless women are in metropolitan areas.

In Ahvaz, 2,700 women are displaced and homeless, with no shelter. These women are left alone somewhere in Ahvaz to wander in the city’s parks and alleys during the day.

They have no place to go at night, so they sit on street corners. Most of them have been identified in 80 hangout areas around Ahvaz.

According to statistics, they are classified into different groups: runaway girls, consumers, abusers, and homeless women (The state-run Shahrvandonline.ir – February 15, 2022).

Lack of shelters and safe houses for homeless and battered women

Shelters and safehouses could solve a host of problems for Iranian women.

Many women’s rights activists believe that if safe houses for victims of violence and poverty existed, the women could be removed from violent environments, and further violence could be prevented.

Unfortunately, the absence or shortage of safehouses and shelters is also a fundamental problem in Iran. Most safe houses are non-governmental, self-governing, or private and operate as charities.

Also, given the small number of safe houses, the priority is to accept women and girls whose lives are in immediate danger or a particular condition, such as pregnancy.

Funding, protection, responsibility, and setting up these houses are cumbersome and lengthy. Obtaining permits sometimes takes so long that it becomes exhausting for the safe house operators to continue their work.

Iran only has 27 safe houses

The conclusion is that out of every two million Iranian women over ten, there is a capacity to accept one abused woman in a safe house. This shows the dysfunctional support infrastructure under the mullahs’ regime for women and girls subjected to violence.

In an Instagram survey, a woman living in Taibad City in North Khorasan answered, “Is there a safe house in your city?” She responded, “Not only do we not have a safe house, but every house in the city can also be a house of violence for us. There isn’t a day or night when we don’t hear screams and cries from one of the houses. We see our relatives and the neighborhood women with bruised eyes and lips.”

Tehran’s General Director of Welfare announced that the city has only three safe houses. There are only 27 safe houses in all of Iran. Each safe house can accommodate about five people (The state-run Rokna.ir – June 7, 2022).

In early February 2021, Nayereh Shahrisvand, the Ahvaz mayor’s representative, revealed a bitter reality when she said, “Ahvaz does not have any place called a safehouse or health resort for women. There is only a camp for homeless men and women operating under the supervision of the municipality.” However, according to research, Ahvaz needs five safehouses due to its size.

An active reporter from the provincial media said, “Last year, a budget was determined for safehouses, but where it was spent is an unanswered question.”

According to Farahnaz Mohammadi, Director-General of Kermanshah Welfare, out of the three safe houses in the province, there is one special for women. It has a capacity of 20 to 25. It admits people who sleep in cardboard boxes in autumn and winter (The state-run Shahrvandonline.ir – February 15, 2022).

In the absence of financial support, women who are victims of their husbands’ mental and physical abuse refuse to report their conditions to social emergency services or the police. Moreover, since safehouses do nothing to alleviate their suffering, the women refuse to go.

Pooneh Pilram said in this concern, “Many homeless women are not even willing to go to the city’s restrictive centers. When we offer homeless women on the street to go to the city house, they say, ‘they will keep us there for 48 hours and then say that someone should pick you up! I don’t have anyone.’ Another says, ‘I am subjected to violence at home.’ She says, ‘I have spoken to the social emergency, but they don’t do anything for people like me. In the end, they hand me over to my father or husband, who constantly beats and abuses me.’ They prefer to stay on the streets rather than being subjected to violence and death in their homes” (The state-run jameh24.com – May 6, 2022).

In Iran, women’s poverty, deprivation, and homelessness have bitter consequences.

For example, Soheila is a teenage girl who, under pressure and scarcity, is forced to sell herself for 2 hours for an air conditioner.

This behavior and unstable marriages increase the number of people with HIV and AIDS, and the lives of Iranian girls and women are destroyed by drug addiction and suicide.

“I know a female garbage collector who has a disabled child who lacks a birth certificate. She explained, ‘I have been beaten many times,’ and sometimes they buy garbage from her at a much lower price. If she protests, she is beaten. She is also a drug addict” (The state-run jameh24.com – May 6, 2022).

In 2021, the provinces Kermanshah, Lorestan, Tehran, and Central had the highest number of per capita addiction-related deaths.

Iran’s Forensic Medical Organization announced, “Last year, 5,342 people died due to the abuse of narcotic drugs and stimulants. Among them, 781 were women. The statistics of drug abuse deaths in 2021 increased to 15.2%, compared to the previous year.”

Recently, a news report indicated that a woman died on the Kerman-Mashhad train. After her body was transferred to Mashhad’s forensic medical center, the cause of her death was stated to be drug-related. One kilogram of opium in 34 packages was discovered in the woman’s stomach (The official IRNA News Agency – May 15, 2022).

What should these oppressed women, who are victims of poverty, deprivation, and systematic violence under the rule of the misogynistic regime, do?

So long as the clerical regime rules in Iran, can there ever be any hope of improving this tragic situation and solving problems such as homelessness among Iranian women?